SIEGFRIED: Premiere and "Ambushed from behind" postponed to an as yet undetermined date

The Deutsche Oper Berlin is in final rehearsals for Richard Wagner's SIEGFRIED with a strict test concept, preparing the continuation of the new RING under the baton of Sir Donald Runnicles and directed by Stefan Herheim. Unfortunately, this premiere, which was scheduled for 18 April, cannot take place either due to the current pandemic situation and has to be postponed to an as yet undetermined date. Clay Hilley is in rehearsals as the title character on stage, alongside Ya-Chung Huang as Mime, Iain Paterson as Der Wanderer, Markus Brück as Alberich and Nina Stemme as Brünnhilde, among others. We will let you know the new premiere date as soon as it is foreseeable.

This also means that the date announced for 30 April in the Tischlerei for the premiere of SIEGFRIED with Sofia Portanet, members of the Deutsche Oper Berlin ensemble and musicians from the orchestra in the series "Ambushed from behind: Power of the Arts" will be postponed.

A scenic festival in three days and one eve – The second day
First performed on 16th August, 1876 in Bayreuth

The new premiere date, the start of ticket sales and subsequent dates will be announced as soon as possible. 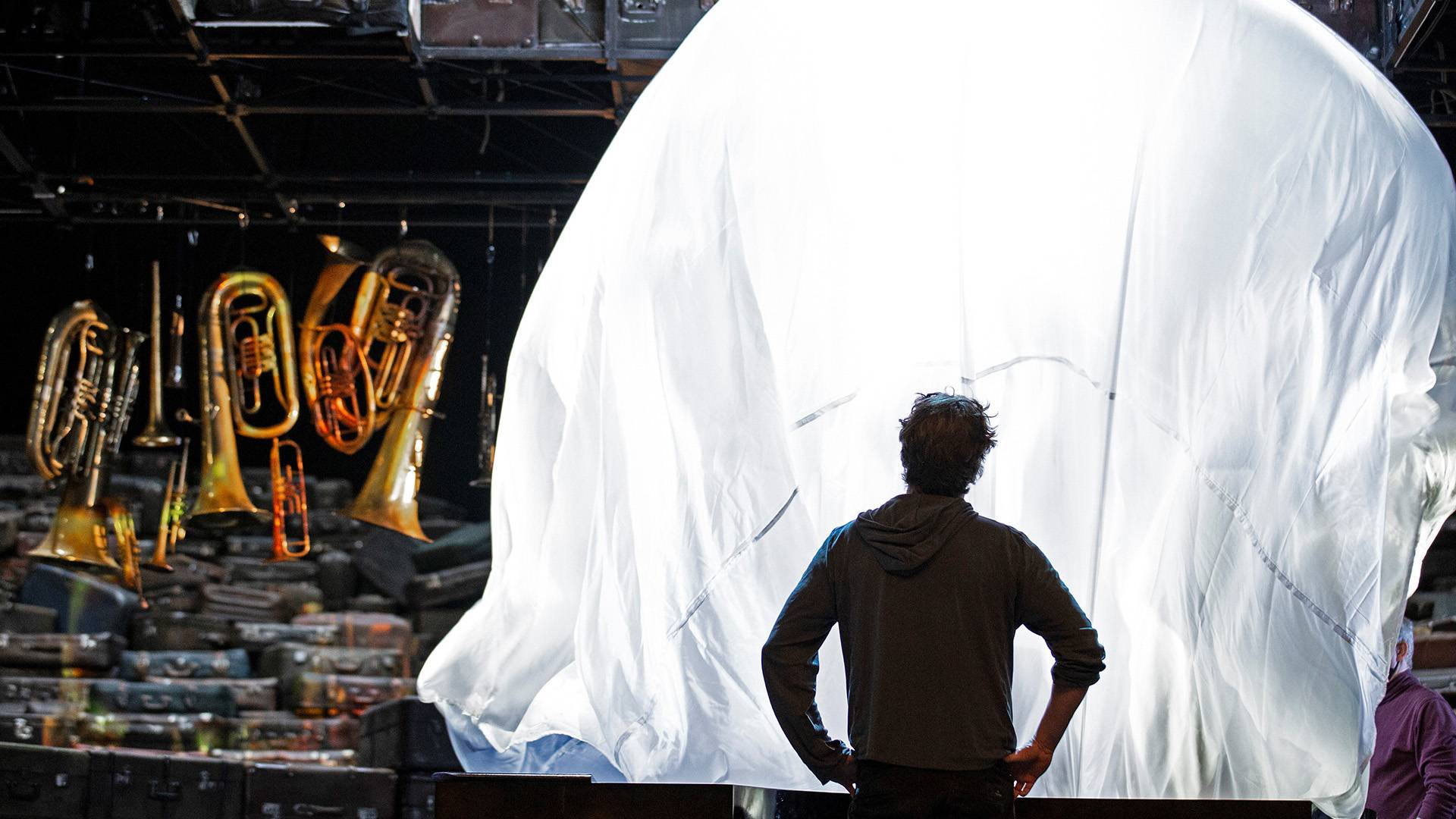 A large cloth plays a central part in the new RING DES NIBELUNGEN. In SIEGFRIED, too, it will repeatedly provide magical moments, often having to be unfurled across the entire width of the stage in a flash and disappearing again just as quickly. © Bernd Uhlig

The two middle sections of the tetralogy set out two ways of experiencing life. On the one hand we are presented in THE VALKYRIE with Brünnhilde, whose maturation process takes her from her discovery of sorrow and empathy to a conscious reflection on what it is to be human. By contrast, Siegfried’s path is mapped out solely as a function of his sensory experience. Where initially the young man’s self-image stems only from his exploration of his own boundless strength, other senses and sensibilities soon come to bear, along with an awakening sexuality. SIEGFRIED presents an encounter not only between man and woman but between two principles – Siegfried’s innate, unquestioned vigour on one side and Brünnhilde’s wisdom born of observation on the other. And as these two diametrical forces unite in a love clinch, the end of the opera seems to be presenting the basis for a renewal of human society.

Wagner described the second day of his RING as a "heroic comedy" - and to this day every new production of SIEGFRIED searches for the balance between comic and tragic elements. In Herheim's version, it is the act of the play that unites the opposites into a whole. The boundaries between animal and human are blurred here, as are those between the characters and their creator; the intensity of the stage moment is in tension with a complex reading of the characters as bearers of meaning. 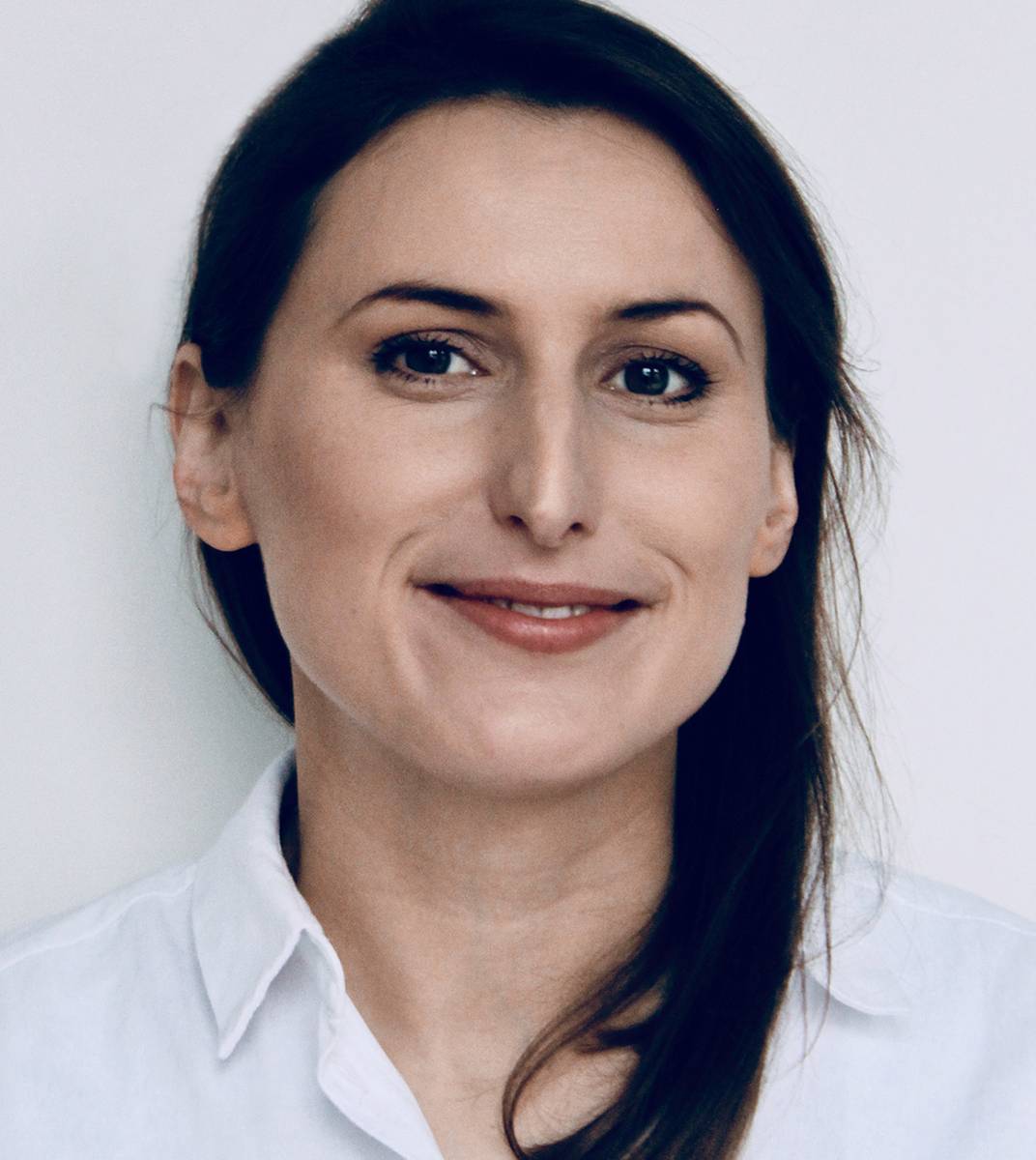 "The Deutsche Oper Berlin is my homebase. I did my set-sculpture training here ten years ago. And now I’m working with Stefan Herheim on the set design for the RING. Stefan’s like a big brother to me. We have fun sparring with each other and are often together for 13 hours a day. In SIEGFRIED Wotan’s energy is represented by a massive sheet of silk. Just as the music is heralding the approach of Wotan this silk sheet has to glide down onto the stage from above. It has to happen in a particular way and we spent days trying to get it right. I plotted the trajectory on the computer and then we tested it - virtually and then in practice. How do we tighten the wire? Should this section or that section be weighted down more? It came together in the end, but we drove the stage crew mad in the process. But this kind of botching and tinkering is precisely where I get my satisfaction. Deep down I’m a mini Gyro Gearloose."

Both of us have a healthy scepticism, so we don’t swallow everything people tell us. And maybe most important: I don’t take ‘no’ for an answer. ... Clay Hilley about Siegfried 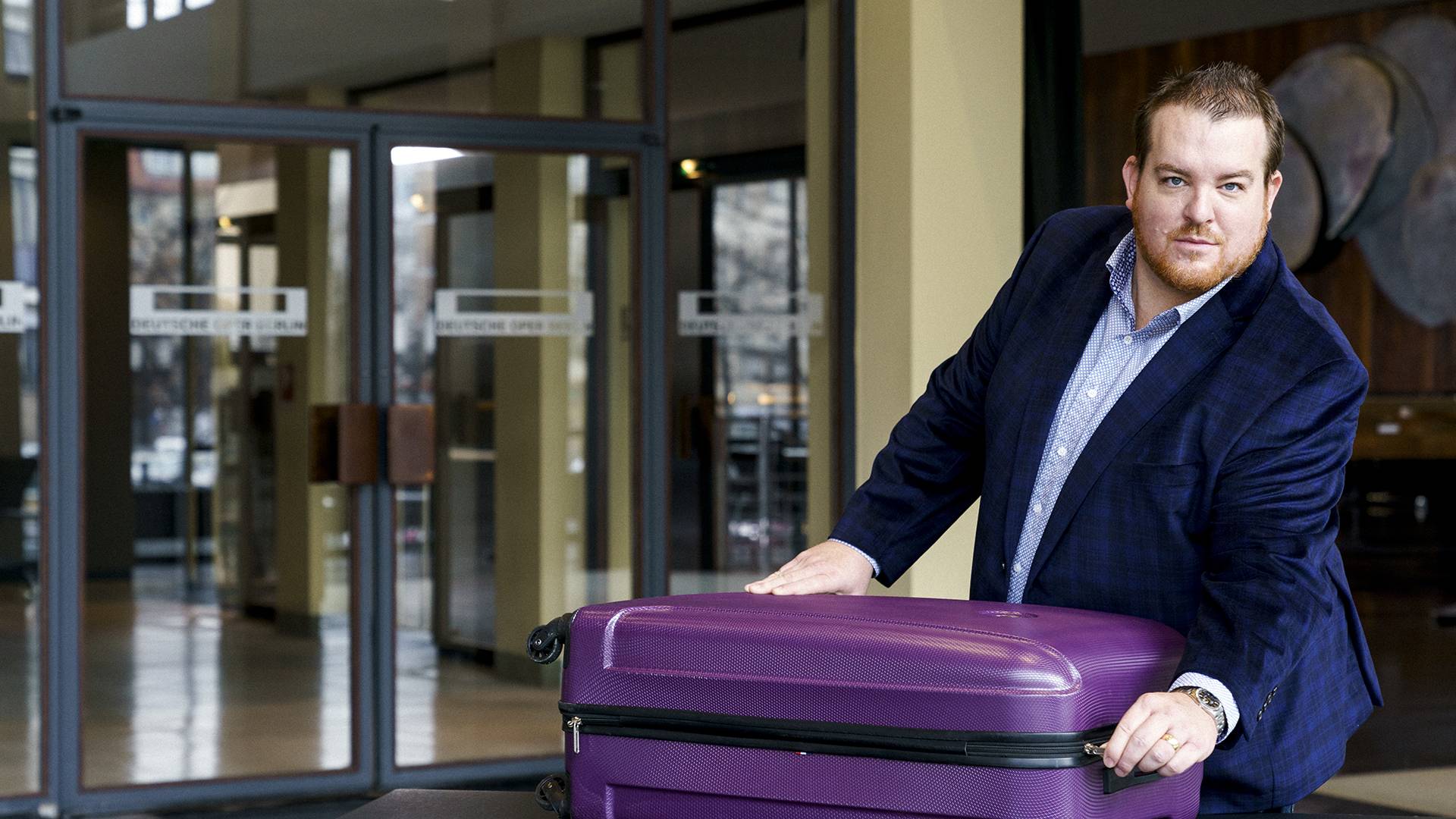 Clay Hilley in the foyer of our opera house © Max Zerrahn

Obviously there are differences, too. Siegfried is the prototypical hero, quite impulsive, very direct and forthright, quite childlike, actually. My idea of heroism is completely different. For me, heroes do good deeds behind the scenes and stick up for minorities and are part of the struggle for a better world on a daily basis. They’re not in the limelight and don’t expect thanks for doing what they do. It could be a nurse on the night shift, a teacher helping a child progress, someone raising money for a good cause. Then there’s the fact that Siegfried isn’t scared of anything. I feel his fearlessness when I’m singing, especially in the final words of the work when he sings about »shining love / laughing death!« Not even death is frightening to him, whereas I know very well what fear is. It hit me in the stomach last year when the theatres and opera houses closed down due to the pandemic. [...] Read here our blog article Clay Hilley: A place of serenity for my soul … my suitcase

Ya-Chung Huang grew up in Taiwan and acquired German as an adult learner. In SIEGFRIED he sings the role of the evil dwarf, Mime 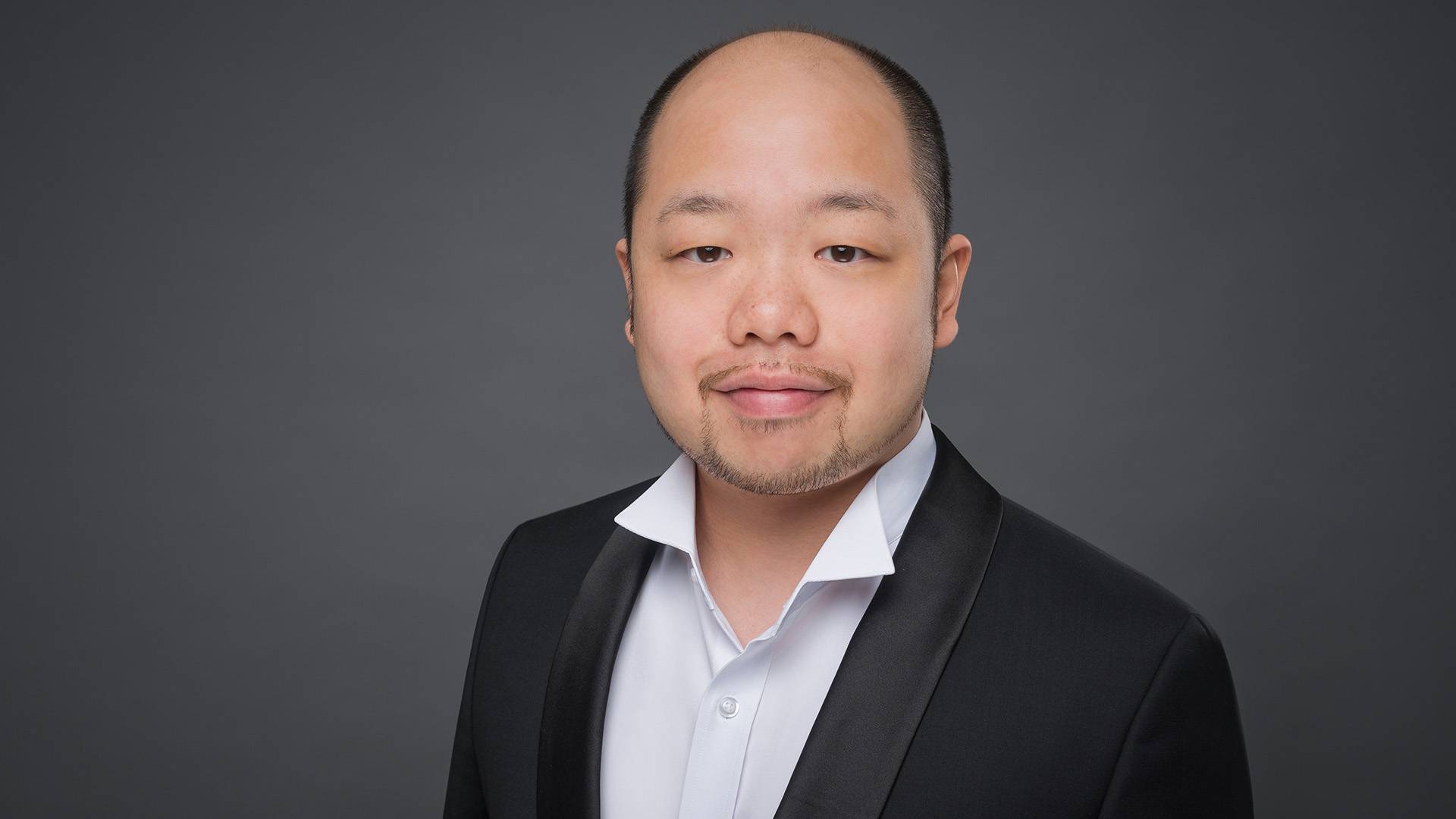 1.) How do you manage to sing in a language you don’t understand? The important thing is to understand the meaning of the words – otherwise I’d feel a bit like a parrot. German has more consonants than my native language does and the consonants make it harder for me to sing legato – or linked. I’ve always had a struggle singing legato in German-language operas and still preserving the clarity of the consonants. 2.) How do you learn a language through the medium of singing? I definitely have learnt a lot of words from my contact with the German repertoire! With Wagner it’s a bit dodgy, because I end up using phrases in everyday speech that no one says anymore, expressions like ‘methinks..’. 3.) Zerschwängen, zertrotzen ... Words like those sound very strange even to native speakers’ ears. How did you go about grappling with Wagnerian German? I may actually have an advantage because of my limited vocabulary! For me Wagner’s German is just German. It doesn’t occur to me that those words aren’t in everyday use ... We have asked Ya-Chung Huang further questions ... to be read in our blog

Ambushed from Behind: Power of the Arts

The new premiere date and the start of ticket sales will be announced as soon as possible.

A cooperation with Musicboard Berlin GmbH 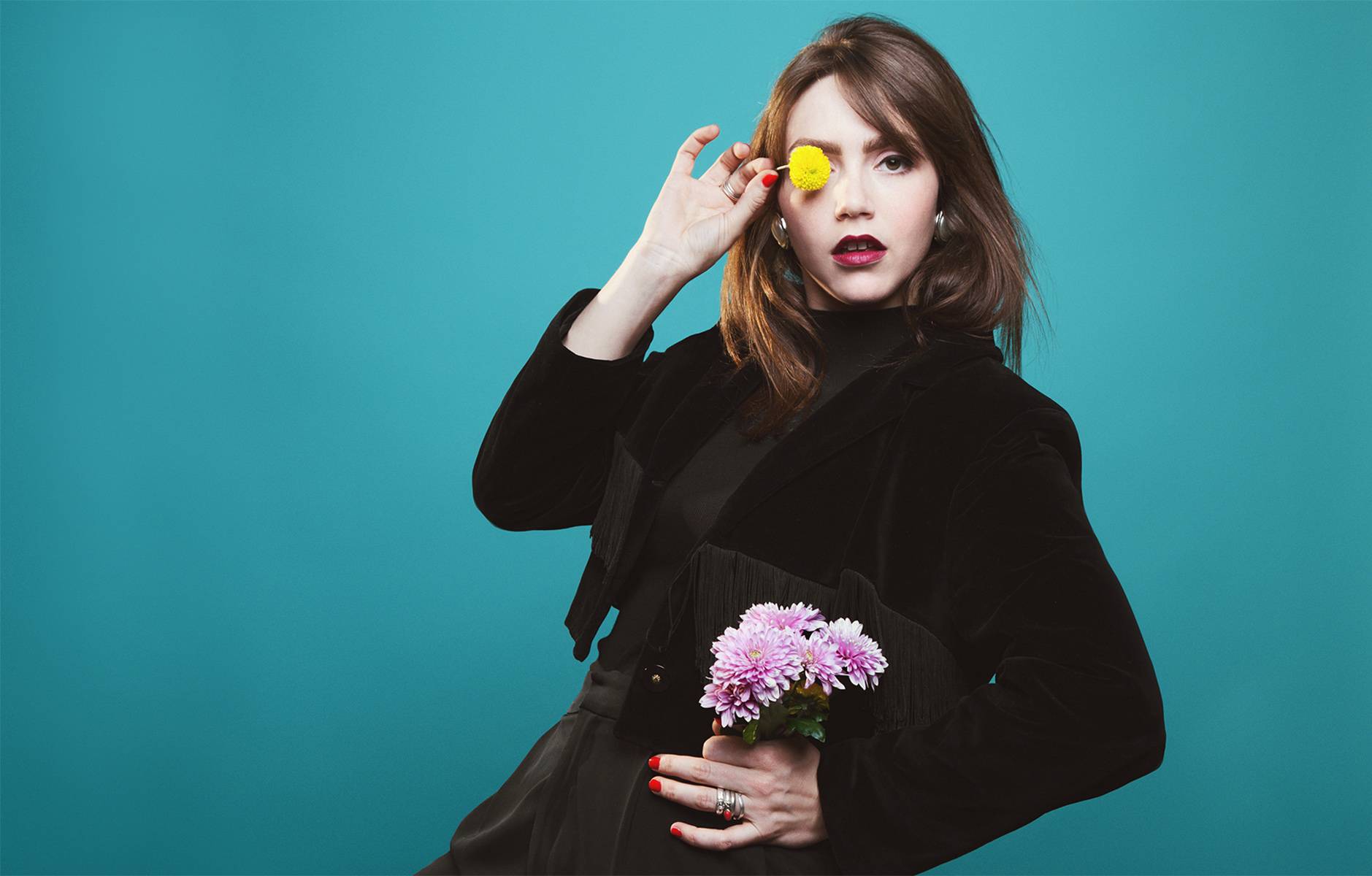 Siegfried is the hero "who knows no fear". Having grown up alone in the forest, in Mime’s smithy, he is innocent of the ways of the world – and yet he has an irresistible urge to sally forth and explore it. Siegfried’s yearning is the central theme for Sofia Portanet as she takes a closer look at the hero - arguably the greatest in opera – in our "Ambushed From Behind" series.

“In my view Wagner is pop – and I don’t mean that in the sense of the mainstream genre that we hear on the radio. Pop, for me, is entertainment. Pop tells stories that people can relate to and respond to. And that’s what Wagner gives us. That’s why his works are popular and performed so often. For this edition of »Ambush« I’m using music from my latest album, »Freier Geist«. My band is teaming up with a four-strong wind section, three strings and four singers from the opera ensemble. Some of the SIEGFRIED passages are being done by us as a band. I’m singing an aria, the one by Notung, when he’s forging the sword. Ever since I sang in the children’s chorus of the Opéra National de Paris I’ve been fascinated by opera as an art form. It has an impact on all levels: the music, the visuals, the performance. Opera opens up a space for drama to flourish. It’s a place where it’s okay to have exaggerated feelings and emotions.” — Sofia Portanet

The power of the arts is great. Yet where exactly does it lie? What can it achieve? Whom can it reach? What interests does it serve? THE POWER OF THE ARTS is the theme of the late-night series AMBUSHED FROM BEHIND. As of the 2020/21 season it will be curated by the singer, composer and director Elia Rediger. It thus continues the series' successful concept of providing commentary on five premieres on the main stage.