On the work
Suffused with the spirit of the French Revolution, FIDELIO explores issues of individual and collective freedom in the face of tyrannical suppression. For his one venture into opera Beethoven chose a political event rooted in the French tradition of rescue opera. It tells the story of a fearless woman, Leonore, who triggers the end of the old order by having her husband released from prison, where he has been detained on a whim. Far from evincing Beethoven’s inability to compose a coherent opera, this mixed bag of genre elements – German light opera, heartfelt arias, exquisite orchestral interludes and a symphonic close – reflects his revolutionary idea of dramaturgical opposites and subversion of form. The further Leonore descends into the depths of the dungeon, the clearer the existential core of the drama becomes. In an explosive choral and symphonic finale, which, with its quote from Schiller’s “Ode to Joy”, foreshadows Beethoven’s “Ninth”, the uncompromising affirmation of liberty, human rights and humanist ideals bursts forth. The work has repeatedly been appropriated for political ends - on both sides of the spectrum – with Leonore acquiring iconic status. Yet Beethoven’s musical vision of a humanist society still manages to thwart all attempts to encapsulate the opera in simplified interpretations.

On the production
David Hermann, who has attracted plaudits at the Deutsche Oper for his stagings of such diverse works as THE LITTLE MATCH GIRL, ORESTEIA and THE MAKROPULOS AFFAIR, has now teamed up with set and costume designer Johannes Schütz to tackle Beethoven’s masterpiece. Their production homes in on interior and exterior lives, liberty and captivity, power and powerlessness. For FIDELIO they have created a set that renders, in poetic images, the jail’s hierarchy and mechanisms of manipulation, so vividly portrayed by Beethoven and his librettist. With his sensitive and psychological touch, David Hermann lays bare the deformations and dangerous instability of, and strain felt by, characters who are part of this unbridled system – be it beyond their control as prisoners or “willingly” as wardens or employees. Leonore, too, ventures deep into the system, moving from light into darkness, with the pressure steadily mounting on all the protagonists as she does so. Is liberty something that can be fully achieved without a seed of new sorrow being sown? 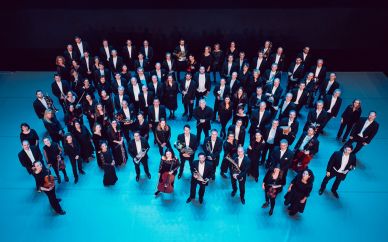