Opera in 4 acts by Umberto Giordano
Libretto by Luigi Illica
First performed on 28th March, 1896 at Milan
Premiered at the Deutsche Oper Berlin on 28th September, 1994

It is the summer of 1789. A festivity is being prepared in the castle of Countess de Coigny. Charles Gérard, a servant of the Countess´ voices his hatred of the French aristrocracy´s decadence. His aged Father is forced to labour all day long and Gérard himself leads the undignified life of a lackey. Moreover, he is secretly and unhappily in love with Madeleine de Coigny, the daughter of the House with whom he was raised. The political situation is very tense. When the visitors attending the ball finally arrive, they try to distract themselves from the disquieting news from Paris with the help of arcadian idylls and games. The young poet André Chénier is among the guests. Madeleine requests him to recite a poem. He sings of love and laments the injustice of the powers that be in such a convincing manner that Madeleine is deeply moved and forced to quit the room. The doors are suddely opened and a mob of irate people led by Gérard shocks the ball guests. However, the Countess manages to pacify and disperse the mob. The dancing continues.

It is five years later and nobody is dancing. Paris trembles under the regime of Robespierre. Gérard has been elected prosecutor at the revolutionary tribunal, the impoverished Madeleine lives in Paris, supported by Bersi, her former maid, who now works as a courtesan. Chenier is being persecuted due to his poems against Robespierre´s regime of terror. Although his friend Roucher entreats him to leave Paris, he refuses as he has fallen in love with an unknown woman who secretly corresponds through letters. The unknown woman is no other than Madeleine. When the two meet and confess their feelings during a nocturnal rendez-vous, they are surprised by Gérard who has been looking for Madeleine with the help of his spies. Gérard and Chénier fight and Gérard is wounded. Gérard implores his rival to flee with Madeleine and guard her safety. At a revolutionary tribunal meeting he later signs the prosecution warrant against Chénier, whom he considers to be doomed already. Madeleine attempts to save her lover and offers herself to Gérard who is deeply moved by her love. He vows to defend the poet before the tribunal, but it is in vain. Chénier is sentenced to death. On the eve of his execution Madeleine manages to enter the prison with the help of Gérard. She bribes a guard and takes the place of another condemned woman. United, the lovers await death.

Although Umberto Giordano´s ANDREA CHENIER was rarely performed, the opera belongs to the most impressive works representing the so-called »verismo«, a characteristic of the Italian Opera that emphasized naturalistic elements not only in the choice of subject, but also in the musical execution. Pietro Mascagni was the most articulate representative of this movement. His one act opera CAVALLERIA RUSTICANA had won the first prize in the opera competition initiated by publisher Edoardo Sonzogno and subsequently made him famous. Important »verismo« characteristics are also to be found in Giordano´s Revolution Opera, such as the musical deployment of historical dances and marches from the era predating the French Revolution. Famous revolutionary tunes, such as »Ça ira«, the Carmagnole or the Marseillaise, are also noticeable, either as musical hints, or even directly quoted in central parts of the work.
The main protagonist, the poet André Chénier has been cast true to the historical character, and the atmosphere of the French Revolution with its alterations between terror and pathos has been very effectively recreated for theatre. The story in which the poet, Gérard and Madeleine find themselves entangled is rendered all the more poignant against this backdrop. 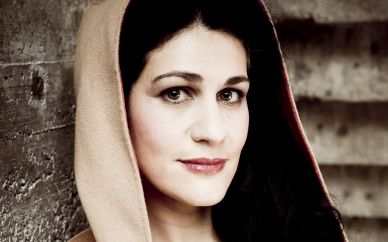