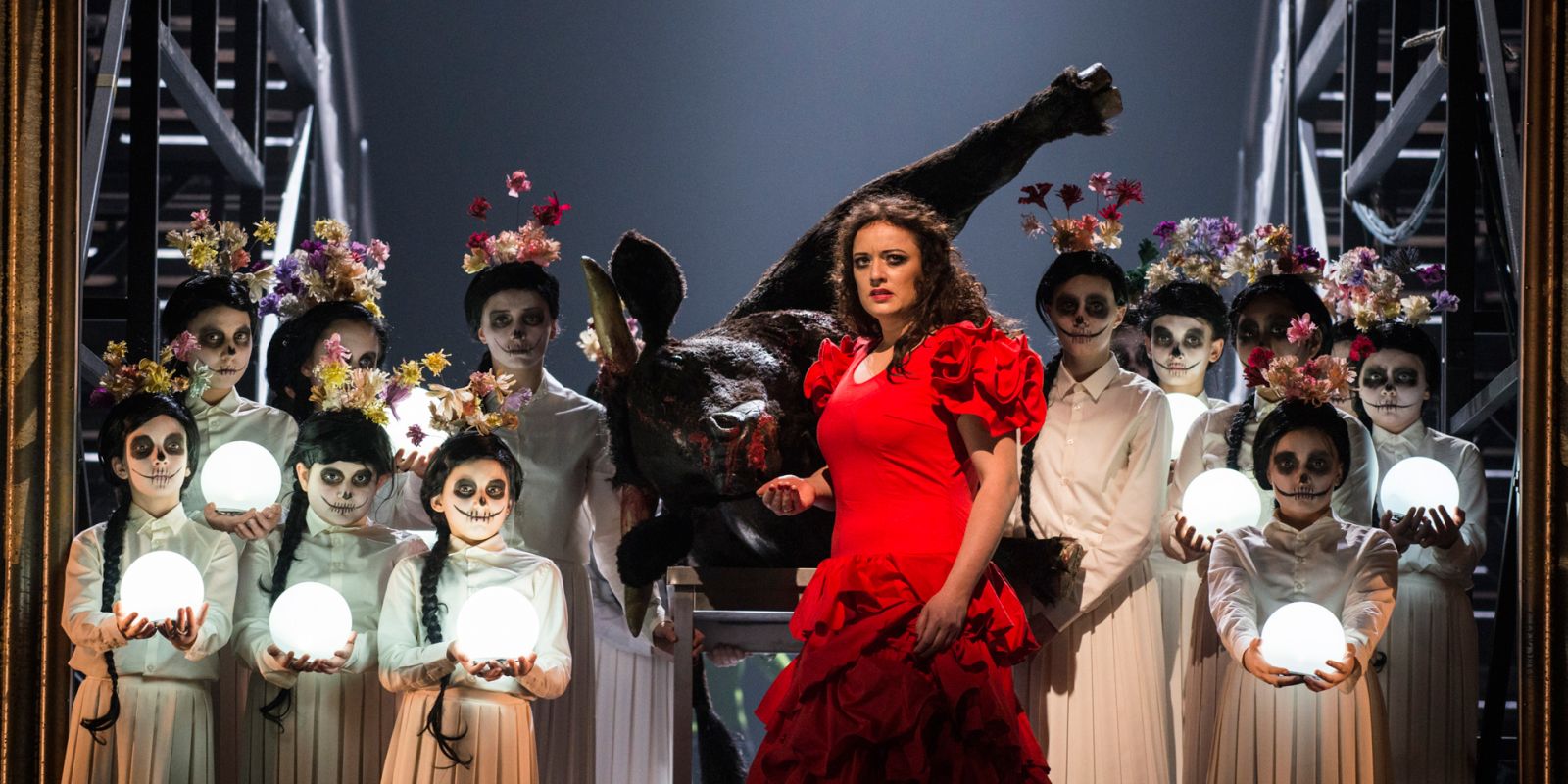 According to estimates by the Allgemeiner Blinden- und Sehbehindertenverein Berlin, there are about 6,000 blind and 20,000 visually impaired people living in Berlin. Like the average population, one tenth of them are probably interested in culture. Live audio description helps these guests to experience the visual events on stage intensively.

On television, there are films with an audio channel where a narrator describes the action for people with visual impairments. We are now offering opera lovers the same thing, except that it is not produced, but spoken live. Förderband e.V., Kulturinitiative Berlin has specially trained speakers for this. They speak the commentaries in a soundproof booth at the end of the hall, and they are transmitted by radio. To hear them, you can borrow a device in the foyer and receive the audio commentaries during the performance by pressing a button in your ear.

A podcast with a special introduction is available online in advance of each performance. Approximately two hours before the performance begins, a special visitor service enables visitors to experience the elements of the respective production through dialogue and tactile perception by means of guided tours during which the stage space can be explored and props, costumes and mask elements can be felt, and through dramaturgical preliminary discussions.

Dogsitting for guide dog owners is possible on request for individual performances.

In its mixture of Viennese folk theatre, Masonic mystery and fairy tale, this opera is probably the most frequently performed in the German-speaking world and, in Günter Krämer's colourful, richly pictorial production, a favourite with our audiences.

Bizet described his opera as an "operetta with a bad ending" - and rightly so, because the unique thing about CARMEN is the mixture of romantic opera, realistic drama and Offenbach operetta. The production by Ole Anders Tandberg tells the story in powerful images that alternate between shock, grotesqueness and pathos. 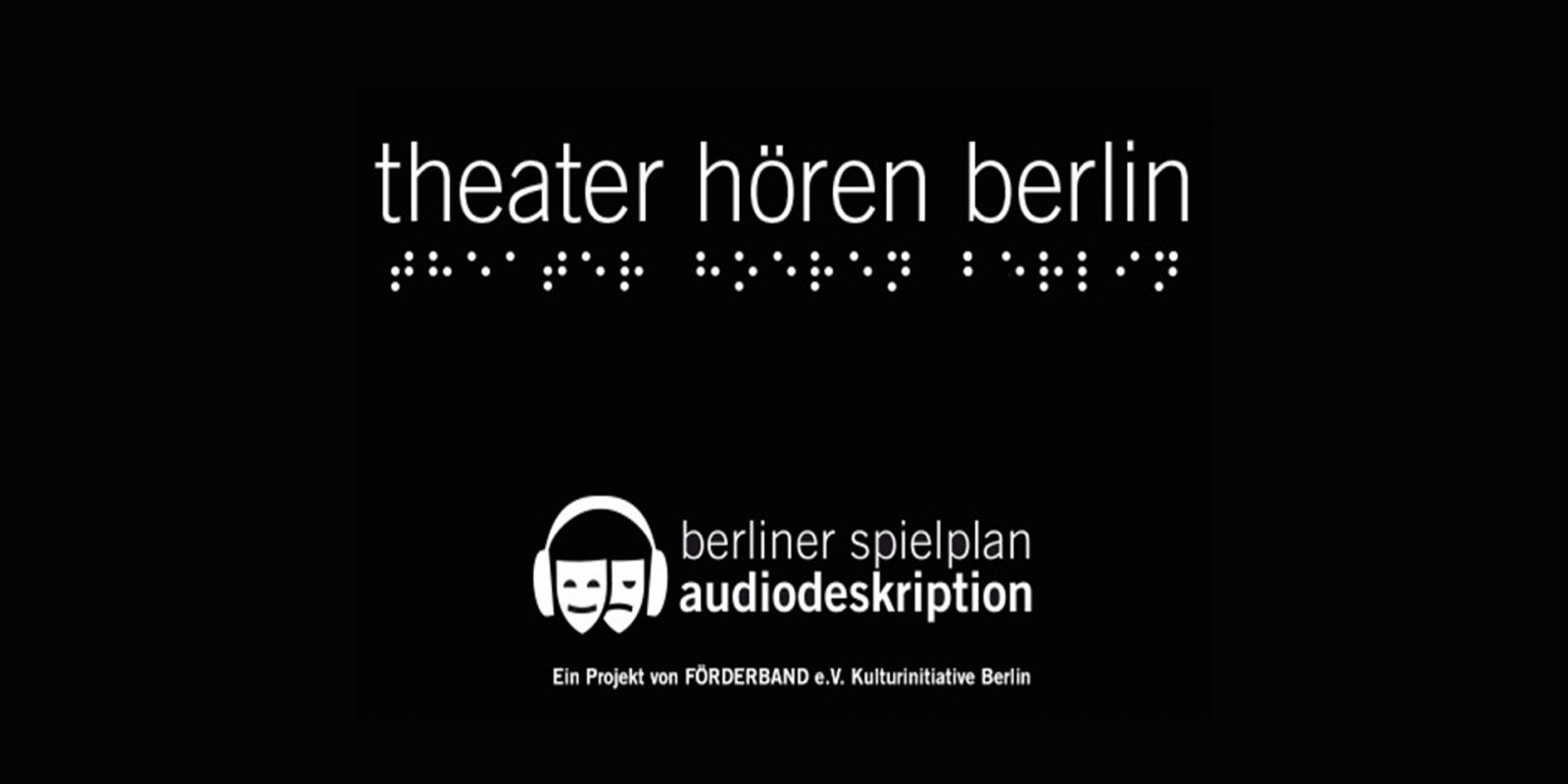 With the "Berliner Spielplan Audiodeskription", for the first time, a genre-overlapping and significant participation in the stage culture of the capital city is made possible for blind and visually impaired people.

Partner theatres of the pilot project

Audio description in the theatre is a commentary that is precisely integrated into the overall event and precisely describes the elements of a performance that can only be perceived visually to blind and visually impaired audience members. Visual elements are rooms and costumes, but also physical, mimic and gestural actions or - as in musical theatre - text parts on displays.Audio description describes all visual elements that are important for understanding the stage action and thus helps blind and visually impaired audience members to develop inner images and their own understanding of the performance.

Unlike film and television, audio description in theatre is as live as the performance itself. The live audio description is done by a person sitting in a soundproof place with a view of the stage and thus unnoticed by most of the audience.

This person observes the stage in order to fit the commentary precisely into the pauses in speech, action or music. In doing so, the commentators can respond to changes in what is happening on stage as well as - if necessary - to reactions from the audience. Blind and visually impaired spectators follow both the audible events on stage and the commentaries of the speakers transmitted via radio link and headphones.  In order to be able to describe live and precisely at the same time, the comments must be well prepared, which is why the descriptors prepare them beforehand and have them checked for comprehensibility by visually impaired and blind editors. As a supplement to the live commentary, a tactile tour is often offered before the performances, during which the blind and visually impaired audience members can feel the stage set, costumes and props. 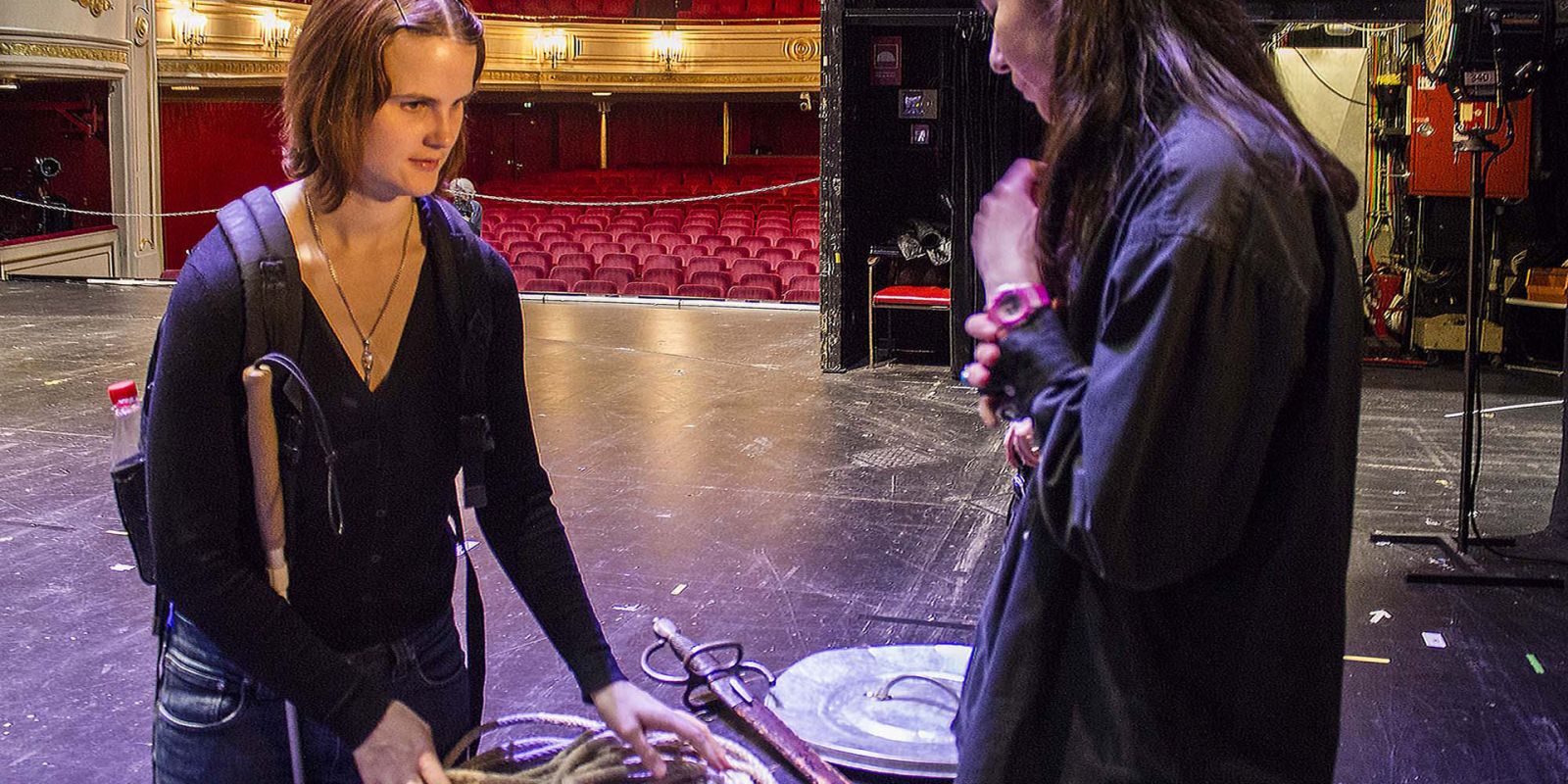 Lavinia Knop-Walling of the Berliner Spielplan Audiodeskription project is herself blind. Here: handling props during a tactile tour at the Deutsches Theater © Christiane Reinsch

“Blind people, too, want to know what is going on onstage. That’s what the Berliner Spielplan Audiodeskription project is all about. We create descriptions of what is happening onstage. How are the people moving around? What does the set look like? There a several stages to the process. First someone writes a script based on the staging of the relevant work. The script is then assessed by two people, one sighted, one blind. The audio description is spoken live through the audience’s headphones or recorded for streaming. The project also includes tactile tours, with people treading the boards of the actual stage and handling props – although that’s on hold at the moment because of Covid. For me, audio description is more than just a service; it’s an art in its own right. It transforms a staged piece into a completely different work.“ - Lavinia Knop-Walling

What happens during a tactile tour?

The tactile tour is aimed at blind and visually impaired people to give them a more vivid impression of the stage action for their later experience of the performance. As a rule, the one-hour tours begin two hours before the performance.