In German with German surtitles

The world premiere of BÄR*IN is the culmination of a joint project between composer Arne Gieshoff and director Franziska Angerer, in which they explore the relationship that exists between human beings and animals. This experiment in musical theatre draws heavily on Nastassja Martin’s novel “In the Eye of the Wild”: During a research trip in the Siberian wilderness the anthropologist is bitten in the face by a bear and badly injured. Martin’s dramatic story of a woman’s convalescence is simultaneously the beginning of a transformation: the distinction between herself and the bear become blurred; she has become half human, half bear – a bi-natural creature in which worlds implode.

Berlin’s history is likewise ursine in the extreme. From 1939 to 2015 the enclosure in the Köllnischer Park housed successive generations of bears, living and breathing versions of the city’s heraldic symbol. No less than their human neighbours, the bears are intrinsic to the city – yet their view of their urban surroundings remains largely unseen. The first family of bears perished in the bombardments of the Second World War, and their successors witnessed a city in a permanent state of flux between immediate post-war reconstruction, cold-war division, reunification and international stature as one of the world’s great centres.

The evening creates a prismatic memory space and brings Nastassja Martin's narrative to life as an immersive experience. Arne Gieshoff's composition, in which singing, speech, live music and electronics are tightly interwoven, meets the sound of a three-piece band in BÄR*IN, whose songs tell the stories of Berlin's urban bears. Their sound, which ranges from swing to techno to hip hop, is a journey through the history of Berlin popular music from the beginnings of the Bärenzwinger to today. BÄR*IN is a hybrid evening about metamorphoses and an invitation to consider our world as a structure in which not only humans are active agents.

Director Franziska Angerer lives and works in Munich. Engagements have taken her to venues such as the Staatstheater Darmstadt, the Residenztheater München, the Landestheater Tübingen and events like Munich’s SPIELART Theater Festival. In her work she questions anthropocentric thinking and explores issues such as the exhibitionistic quality of objects, plants and animals, with a focus on extended forms of musical theatre. For her directorial work on Christian Jost’s DICHTERLIEBE, a cinematic project of musical theatre, Angerer was awarded the 2021 Otto Kasten Prize by the German Theatre and Orchestra Association and received a special mention at the 2021 Götz Friedrich Awards.

Works by the composer Arne Gieshoff have been performed by the BBC Scottish Symphony Orchestra, Philharmonia Orchestra, London Philharmonic Orchestra and Collegium Novum Zürich, among other ensembles. His oeuvre ranges from instrumentals for heterogeneous line-ups of musicians to conceptual installations involving specific locations and incorporating found objects, field recordings, interactive live electronic elements and live input from singers and musicians. 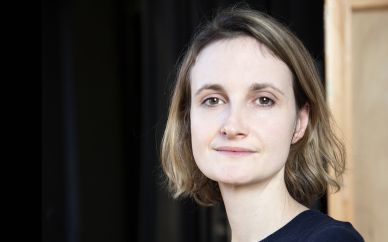