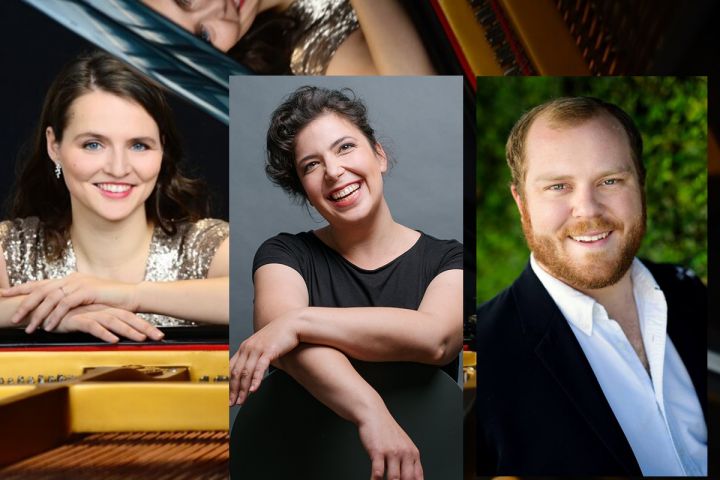 Since its premiere in 2019, THE SNOW QUEEN has been delighting not only children in the Tischlerei of the Deutsche Oper Berlin. This year, too, there are numerous performances on the programme. All the greater is the joy that Alexandra Ionis and Henriette Zahn from the cast of DIE SCHNEEKÖNIGIN have teamed up to create a little door of the Advent calendar. Together with Oliver Boyd, baritone in the chorus of the Deutsche Oper Berlin, they present a colourful programme. In addition to Brahms, Schönberg and Kurt Weill, songs by the composer of the SCHNEEKÖNIGIN, Samuel Penderbayne, and his teacher Moritz Eggert will be heard as a special highlight.

Alexandra Ionis from Berlin studied at the Conservatorio di musica Giuseppe Verdi in Milan and at the Accademia Nazionale di Santa Cecilia in Rome. In 2016 she made her debut in Strauss' DIE ÄGYPTISCHE HELENA at the Deutsche Oper Berlin. Other productions here at the house included DEATH IN VENICE, IL VIAGGIO A REIMS and IL TROVATORE. At the Staatsoper Unter den Linden she sang in Widmann's BABYLON, Reimann's GESPENSTERSONATE, the world premiere of Eötvös' SLEEPLESS, in DER ROSENKAVALIER and most recently in the new production of DER RING DES NIBELUNGEN as Schwertleite / DIE WALKÜRE.

Henriette Zahn is a pianist specialising in chamber music and song interpretation and studied in Munich, Lübeck and most recently in Wolfram Rieger's Lied class at the Hanns Eisler Academy of Music Berlin. She has performed with the Hamburg Philharmonic State Orchestra, the Karajan Academy, the Württemberg Chamber Orchestra and the Goldmund Quartet, among others. Performances have taken her to the Deutsche Oper Berlin, the Schauspielhaus Hamburg, the Bremen Theatre, the Salzburg Festival and the Allerheiligen Hofkirche in Munich. She has worked closely with the composer Samuel Penderbayne and the pianist Anna Buchberger.

Oliver Boyd studied at the Queensland Conservatorium with vocal coach Gregory Massingham and at the Hochschule für Musik Hanns Eisler Berlin with Christine Schäfer. In September 2018, Oliver Boyd sang the lead role of Reverend Calloway in Paul Dean's opera DRY RIVER RUN. In 2017 he made his concert debut with the Queensland Symphony Orchestra in the role of Dancairo / CARMEN. As a soloist he has appeared in Handel's Messiah, Mahler's Lieder eines fahrenden Gesellen, Haydn's Nelson and Paukenmesse, Mozart's Requiem, Vespers and Missa Brevis, and Schubert's Mass in G major. Oliver Boyd has won numerous prizes, including first prize in the Royal Melbourne Philharmonic Aria Competition and Champion of Champions in the Queensland Eisteddfod. He was named as one of the Brisbane Lord Mayor's Young Artists. Since the 2021/22 season, Oliver Boyd has been a member of the 1st bass voice section in the chorus of the Deutsche Oper Berlin.