The little ones carry the cross

The MATTHÄUS-PASSION is one of the most difficult and complex choral works ever written. Benedikt von Peter reinvents Johann Sebastian Bach’s classic – as a staged production with a massive cast. 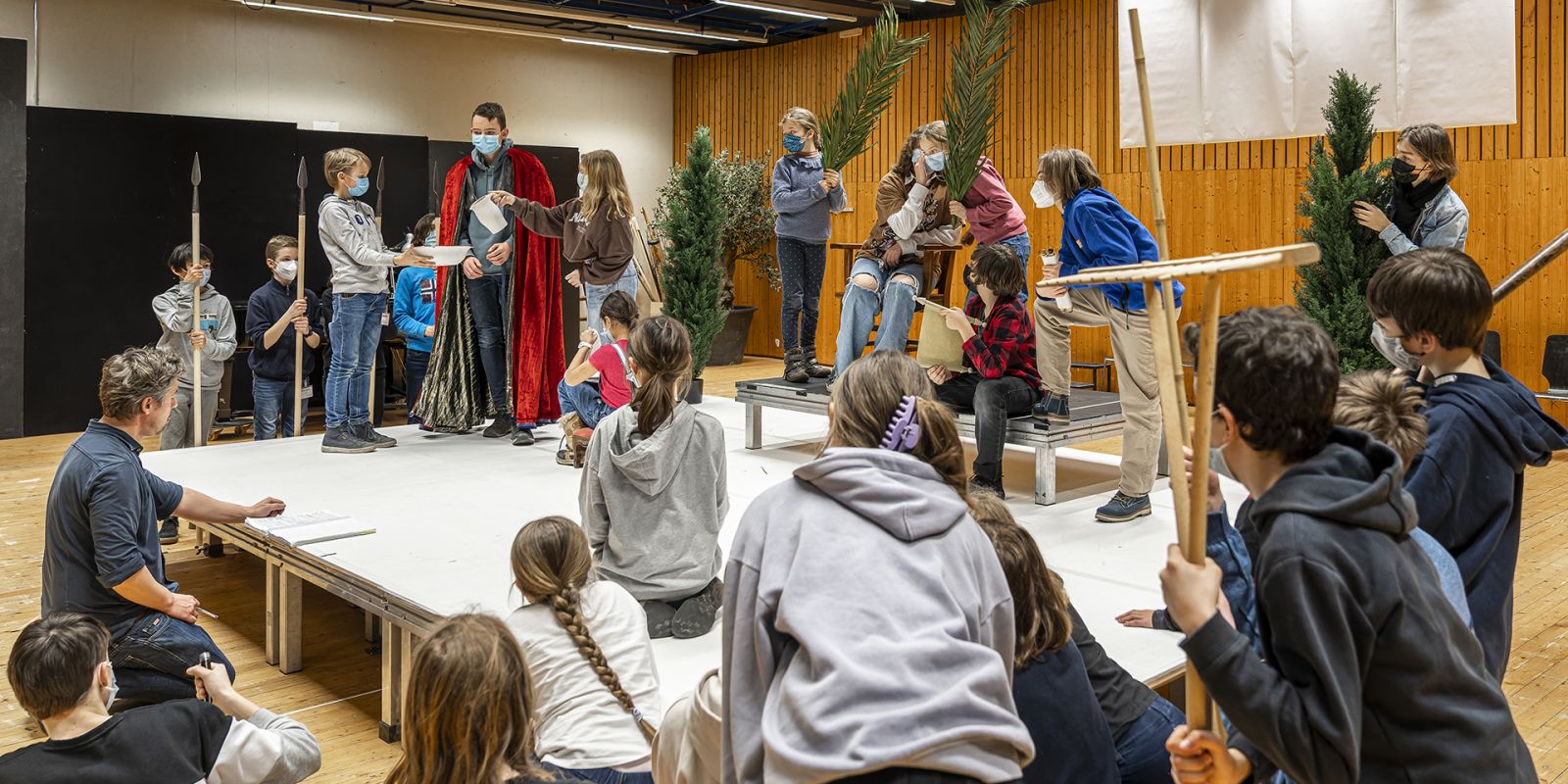 Two choruses, two orchestras, 28 sections full of variations, a monumental work lasting almost three hours – the MATTHÄUS-PASSION may be the most complex choral work ever written. How should such a milestone of music history be treated today? How does one bring this 300-year-old work to life? The director Benedikt von Peter simply takes Johann Sebastian Bach’s megalomania a little bit further: in his production, there will be three choruses and four orchestras spread out from the stage to the tiers, and each orchestra will also have its own organ. There will be eight singers on stage, plus an amateur chorus singing from the auditorium in every performance.

However, the expansion of the cast is not all Benedikt von Peter has planned for Bach: his MATTHÄUS-PASSION will be a staged production. Bach may not have conceived the oratorio as a musical theatre work – in fact, he was absolutely determined to write nothing resembling an opera. Yet the work tells a story. And that story can be shown. Young persons aged eight to twelve will play the tale of Jesu passion and crucifixion. Jesus will be depicted by several children in turn.

Ever since “Fridays for Future” began, children have been more present in the public space; the debates on coronavirus policy also focused repeatedly on schools. Young people are the focus of current discourse, and many of them have developed a sense for politics. Benedikt von Peter wants to bring this social reality in to the opera house. That is one reason why children perform in this production, enabling the audience to draw connections between the classic and current issues, such as the climate crisis. “Why are children raised according to values which their own parents do not live by,” von Peter wonders. He asks himself “why they have to grow up in a world destroyed by people who lived before them, destroyed because the world was wrong.”

Benedikt von Peter is known for productions with a strong current political focus – and for his work with choruses, which he likes to place within the audience. Peter calls theatrical auditoria “space theatre”, and he likes to take advantage of the entire location, not just the stage itself. The way in which he uses choruses, seating them between the listeners, creates proximity. Turns music into an experience. Generates ownership. The function of the choruses is to create a connection between the orchestra, the singers and the audience. In this production, this may go so far that the audience can join in for some of the familiar songs. For this is another characteristic of the MATTHÄUS-PASSION: some of its pieces are familiar melodies today which everyone has heard before; others are complex and polyphonic works of art, four-part chorale settings using various musical forms common at the time.

Bach’s masterwork was originally ignored by his contemporaries – it was too modern, too exotic, and subsequently fell into oblivion. It was Felix Mendelssohn Bartholdy who sparked a Bach renaissance 102 years after its first performance, in Berlin in 1829. Only then did the St. Matthew Passion become a widely-performed standard work, which it has remained to this day. “Even such an established classic has to be given a new lease on life from time to time,” says von Peter.

Benedikt von Peter has directed at theatres and opera houses in Germany and Switzerland, including the Frankfurt Opera, the Hanover State Opera, the Komische Oper and Deutsche Oper Berlin. From 2012 to 2016 he was the director of musical theatre at the Bremen Theatre. From 2016 to 2021 he was the artistic director of the Lucerne Theatre. Since the 2020/21 season he has been artistic director and artistic opera director at the Basel Theatre.