The sound of an Italian village in the morning

Alfredo Sannibale in his workshop, where his grandfather already worked. He helped out here for the first time at the age of six. As a young man he took part in the world premiere of EXPERIMENTUM MUNDI and now also in Berlin © Karl Mancini
back

These early-morning rituals make up the opening scene of EXPERIMENTUM MUNDI, a work of musical theatre by the Italian composer Giorgio Battistelli. The opera presents the sounds and noises made by a total of sixteen workers and artisans going about their respective jobs, accompanied by a women’s chorus, a percussionist and the words of an actor. The subtitle of the piece promises a work of imagined music.

As if the idea of writing an opera consisting of manual-labour noises weren’t whacky enough, the composer went one step further and enlisted the services of genuine «artigiani« in place of professional actors – all of them masons, joiners, road pavers and other skilled workers from Battistelli’s home town of Albano Laziale. The experiment brings together two very different settings: opera stage and work bench. A provincial town and the outside world. 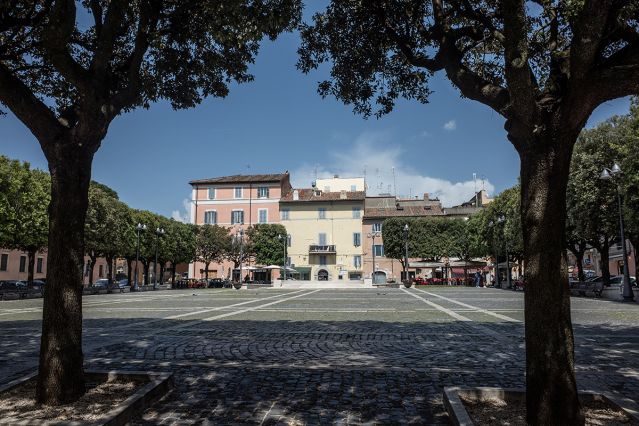 The Piazza Pia in Albano Laziale, where composer Giorgio Battistelli heard the sounds made by a cobbler at work and drew inspiration from the rhythm of his hammer © Karl Mancini

And the experiment works. The spectacle of tradesmen displaying their skills of the stages of New York, Hong Kong and London has received critical acclaim. Not only has a brilliant maestro crafted musical instruments out of industrial tools and turned workers into artists; without the men from Albano Laziale, Battistelli might never have achieved the fame he has.

To understand how this curious combination gestated from idea to international hit, let us go back to where it all began 40 years ago on the Piazza Pia in Albano Laziale, nestling in the hills around Rome. Fresh from his composition studies, Battistelli was one day taken by the rhythmic work processes of a cobbler. After finding other instances of auditory richness, Battistelli came up with a work designed not for brass and stringed instruments but for hammer, wood planes and the like.

And on this sunny spring morning Alfredo Sannibale, 75, is sitting at the front of his workshop and using one of those planes to smoothen the inner surface of a half-built barrel. Behind him, a windowless cave extends into the interior of an orange building. With his sun-darkened fingers he pushes the tool forward, draws it back. Shavings fall in blonde curls onto the dusty floor.

Sannibale was part of the crew at the very first performance of EXPERIMENTUM MUNDI. His name and those of his brother and father grace the original publicity poster. Battistelli had a hard time persuading the father to agree to take part.

»My father was embarrassed, couldn’t understand the point of appearing on stage,« says Sannibale. There was also the fact that Battistelli was still in his 20s, a »ragazzo«, by Italian standards hardly an adult. He didn’t have the clout to win the men over to his quirky project.

That the initial rehearsals were a failure did little to allay the scepticism. The hired musicians failed to tease the right sounds from the implements. Battistelli needed real tradesmen. »Building a barrel is at least as complex and playing a violin,« explains Sannibale. The project took a turn for the better when his mother, Battistelli’s cousin, persuaded her husband to get involved – and his assent proved to be a tipping point among the other tradesmen.

On 15th May 1981 the entire company finally trod the boards of Rome’s Teatro Olympico together. The three Sannibales went about their work as coopers, road pavers knocked cobblestones into position, grinders sharpened knives and bricklayers built a wall – all watching Battistelli intently as he combined the noises into a polyrhythmic work of art.

Sannibale recalls the applause that followed that first performance to this day. »Never experienced anything like it. We felt it to the core.« And his father needed no further bidding to get him up on stage again.

The gigs piled up, starting with one in the Centre Pompidou in Paris. Berlin, Florence and Vienna followed. In Cologne Karlheinz Stockhausen shook the hand of every cast member. In Adelaide an actor spoke the lines in Maori. In Salzburg Bruno Ganz delivered in German. 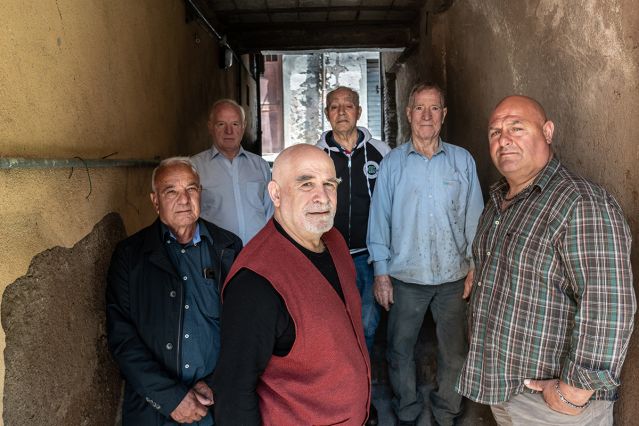 Masters of their respective crafts, the artisans head for Berlin. The »artigiani« from Albano Laziale hone their hand movements to produce the rhythmic work of art that is EXPERIMENTUM MUNDI © Karl Mancini

To date EXPERIMENTUM MUNDI has been staged over 400 times, wowing audiences around the world and bringing Battistelli commensurate fame. In 2009 the production took the Herald Angel Award. These triumphs have helped Battistelli to his current position as Artistic Director of the Orchestra Haydn di Bolzano e Trento, a post he has previously held at the Teatro dell’Opera di Roma and in the services of the International Festival of Contemporary Music at the Biennale di Venezia.

One award scheduled for this year reveals how central this work of musical theatre has been to Battistelli’s career. The Biennale di Venezia will present him with the Golden Lion for lifetime achievement, with EXPERIMENTUM MUNDI being hailed as »a cornerstone of international musical theatre«.

The performance will be the closing event at this year’s Venice Festival. And while the score has not altered in 41 years, the cast has evolved with the passage of time, because, unlike musicians, craftsmen cannot go on forever. »Sooner or later your bones and joints are shot,« says Sannibale. A lot of the original cast passed their roles on to their sons or grandsons.

Vladimiro Carpineti, 49, took over from his grandfather, a blade grinder, and has appeared in hundreds of performances. Carpineti himself is a cobblestone layer and so is able to alternate between two roles on stage. »Every performance is different,« he says. »The start, the end, the audience. I love the unpredictability.«

Vladimiro Carpineti is a tall, broad-shouldered man, whose physicality very much matches his occupation, and his love of rugby is no surprise. So it’s quite a leap to hear him enthusing about EXPERIMENTUM MUNDI, which has been a feature of his life since he was eight. And thanks to Battistelli his life has also helped to make musical history. Carpineti is well aware of this. »It’s all down to Giorgio that our village has travelled the world.« Text: Virginia Kirst