The Maestro turns cinema into opera

Pasolini's film TEOREMA tells of the disintegration of a bourgeois family. Composer Giorgio Battistelli brings the drama to the opera stage

Even in a hectic world metropolis, they still exist, the romantic alleys where green leaves climb orange walls. It is such a street where the Italian composer Giorgio Battistelli’s studio is located, in Rome’s Trastevere neighbourhood. Planters line the cobblestone alley, which is impassable to cars anyway. Battistelli’s “room for thought”, his pensatoio, is on the third floor. The 68-year-old easily climbs the shallow steps. He invites the visitor into the bright studio, where the window are wide open. The large room is reminiscent of a theatre. The furniture is made of dark wood; stage-curtain red is everywhere: the velvet of the armchairs, the music notebooks on the table, Battistelli’s socks and even his iPhone are of a deep, dark red.

Otherwise, the maestro is clothed in muted colours, emphasizing his white curls. He wears black-rimmed glasses and a gold signet ring on his right hand. The scores on the shelves bear his name on their spines; many have German titles. “Die Entdeckung der Langsamkeit” for example, or “Auf den Marmorklippen“.

“Germany is my artistic homeland,” Battistelli opens the conversation. He speaks slowly, carefully choosing his words. “My most important works were born there.” Starting with “Experimentum Mundi”, which Battistelli first presented at the Academy of the Arts in Berlin in 1980. This musical theatre work, whose sound world incorporates the everyday noises of sixteen craftsmen, became a world success on the New Music scene and laid the foundation for his international career. After positions as artistic director of the Teatro dell’Opera di Roma and the Biennale di Venezia, Battistelli is artistic director of the Haydn Orchestra in Bolzano and Trento today.

Battistelli’s career took him to Germany early on: as early as 1975 he attended seminars with Karlheinz Stockhausen and Mauricio Kagel in Cologne; in 1985 he lived in West Berlin for a year. Ever since, his works have been performed at the Theatre in Bremen, the Mannheim National Theatre and the Hanover State Opera. “I have to return to Germany at regular intervals, otherwise I feel a sense of loss,” Battistelli declares. “To me, it is the most democratic country in the field of operatic music, because avant-garde and tradition coexist here.” 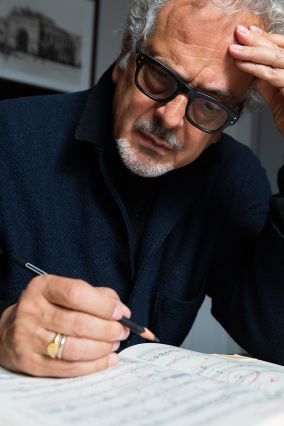 This is the case at the Deutsche Oper Berlin, where Battistelli’s opera IL TEOREMA DI PASOLINI will now be performed. The idea of commemorating the Italian director and author Pier Paolo Pasolini during the centenary of his birth came to Battistelli and Dietmar Schwarz, the Deutsche Oper Berlin’s artistic director, in 2019, as they were having dinner near the Piazza Navona. The choice of subject for this homage was easy, as Battistelli has a special connection with Pasolini via TEOREMA: in 1971, when he was only eighteen, he met the filmmaker during a presentation of the eponymous novel, which Pasolini had written based on the 1968 film. This encounter made a lasting impression on the budding composer.

TEOREMA is about a family of industrialists from Milan whose life is completely upended by a visit from a mysterious guest. Pasolini depicts a family living together in one house, yet like ships passing in the night. The protagonists seem mute, communication fails – until the beautiful young stranger appears, seducing one family member after another. In the end, there is no way of returning to their grand-bourgeois life.

At their long-ago meeting, the young Battistelli asked his idol Pasolini, under the impression of these years of political upheaval in Italy, whether the guest in TEOREMA was a communist. Pasolini answered him with a little smile: “You might consider him an angel of destruction, an exterminating angel.” It took him decades to understand this answer, says Battistelli. The work, however, has continued to cast a spell on him to this day.

“The two central issues are still relevant,” he says: “The question of the role of the family and how we treat what is foreign and strange to us – in TEOREMA, it is embodied by the guest.”

Battistelli is familiar with the feeling of questioning all that is familiar, as an outsider. And he has decided that he likes the role. In a way, he himself is the guest in Germany. “When the audience leaves one of my operas, I hope to have asked a question, not to have given an answer. Doubt is the best motivator. It’s a dynamo, giving you the energy to keep questioning yourself.” 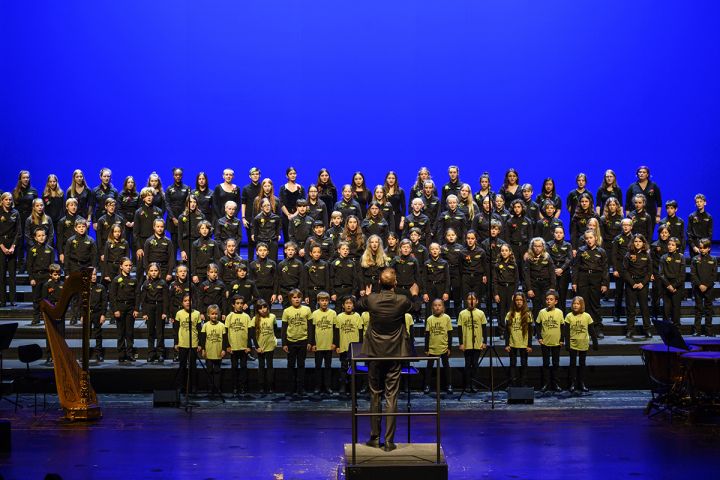 Advent Calendar in the Foyer: The 2nd Door

Around 150 active singers make up our Children's Chorus, which is an important and heavily involved ensemble partner in numerous operas. Its members come together at least twice a week to make music under the direction of Christian Lindhorst. In its performances and concerts on stage, in the Chamber Music Hall of the Philharmonie or at other events, the Children's Chorus of the Deutsche Oper Berlin spans the spectrum from baroque to modern.

In the course of the 2022/23 season, the children and young people aged 9 to 16 will appear on the stage of the house in CARMEN, LA BOHÈME, TOSCA and TURANDOT as well as in the new production of MATTHEW PASSION. And on 18 December 2022, the chorus will take a trip to St. Paul the Apostle Church in Schöneberg, where it will join the Kammersymphonie Berlin for a Christmas programme "In dulci jubilo" with works by Michael Haydn, Johannes Brahms, Michael Praetorius and Gottfried August Homilius, among others.

The children's chorus is sponsored by Dobolino e.V. and Engel & Völkers.