When the prelude to CARMEN begins with the "March of the Toreadors", we hear one of the most famous uses of the triangle in existence. In after-striking eighths, the instrument emphasises the driving rhythm of the piece and adds a silvery sheen to the orchestra. Thirty years before CARMEN, Berlioz had warned in his teachings on instrumentation that no other instrument is "subjected to such regrettable abuse" – and advised extremely conservative use of this tiny orchestral instrument that is often barely heard over the other instruments. Georges Bizet disagreed. He used it as often as he could so as to bring local Spanish flair to the stage, alongside castanets and tambourine, and to create orchestral sounds in which the sensual is intermingled with latent, threatening acuity. 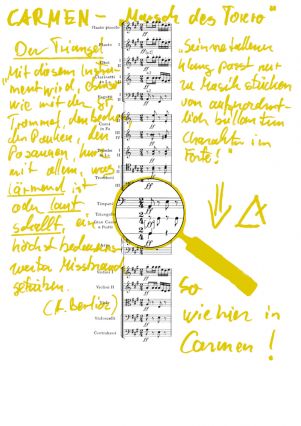