Experience the 16th episode of our video series with Dr Takt here.

The opera begins with the three staggeringly brutish "Scarpia chords" B flat major, A flat major and E major, followed by Angelotti's driving "flight motif". In the first scene he seeks refuge in the church of Sant'Andrea della Valle. The music calms down as the scene progresses, but the "Scarpia chords" appear again at the end of the scene, when Angelotti finds the key to his hiding place in his family's chapel: B flat major and A flat major in forte, with E major in pianissimo and strikingly orchestrated as well. Cellos and double basses play with the woodwinds, but only in very deep and very high registers. There is a gap between the big E and the two-line E, while the high woodwinds are placed such that the instrumental colours only slightly intermingle and create a fissure of sound that comes across as imposing and tense despite the pianissimo. 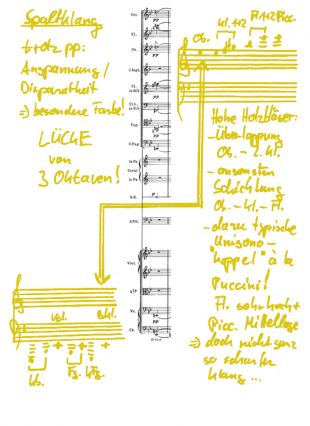