Experience the 17th episode of our video series with Dr Takt here.

Unaware of each other's true identity, mortal enemies Alvaro and Carlo have become friends. Carlo tends to the wounds of Alvaro, who was injured in battle. This brief scene shows the precision and parsimony with which Verdi depicted dramatic events. This section is in F minor, one of Alvaro's keys. When Carlo promises to bestow on him an Order of his family, thereby betraying his true identity, Alvaro is shocked. Verdi quickly modulates to B minor, into Carlo's harmonic tone. But he also instantly injects calmness into the scene with a brief melody of oboes and bassoons. Verdi then modulates back into Alvaro's tones – G major dominant over C minor – and emotions with the four tones of this chromatically descending, harmonically ambiguous melody: ignorant of Carlo's burgeoning hatred, he makes one last request should he die. 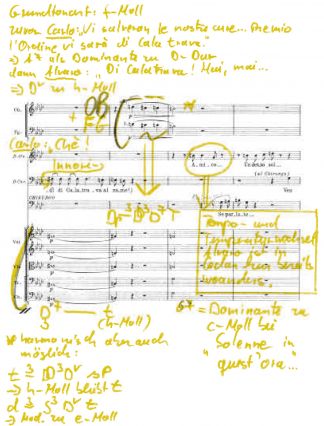