For 35 years, Leo Blech was a central figure in musical life in Berlin. He led the Städtische Oper in Charlottenburg, under director Heinz Tietjen, into the first post-War decade. Blech would have turned 150 years old on 21 April 2021.

"There were a lot of people there, and many new people whom I may have been meeting for the first time, as well as many whom I already knew and to whom I was a sort of reminder of things past. Well, I'm here to turn these things past into things present." These were the words of conductor and composer Leo Blech (1871-1958) during an interview for the RIAS in 1949. He was living in Riga from 1938-1941, and then spent eight years in Stockholm, where he had already been conducting regularly since 1925 and was appointed the court conductor in 1935. After 11 years of exile he returned to Berlin in September 1949, a few weeks before the founding of the GDR, "to collect on the interest of the past 31 years here."

And what years they were. Following positions in his hometown of Aachen and in Prague, Blech shaped musical life in Berlin from 1906 to 1937. Foremost among these was at the Lindenoper, where he first stood at the podium at the Königliches Opernhaus and then the Preußische Staatsoper as (Royal) General Director – a title bestowed upon him by Kaiser Wilhelm II in 1913, ranking him among Spontini, Mendelssohn, Meyerbeer, Muck and Strauss. Other conductors had to make do with the title of "court conductor".

Tensions arose in 1923 between Blech and Staatsoper director Max von Schillings, whereupon the former temporarily left the opera house in favour of other activities. For example, he conducted the premiere of Emil Nikolaus von Reznicek's HOLOFERNES at a premiere of DIE ZAUBERFLÖTE at the Städtische Oper in Charlottenburg, before the new director Heinz Tietjen brought Blech back to the opera at Under den Linden in 1926. In 1929 and 1930, Blech could be seen conducting SAMSON ET DALILA by Camille Saint-Saëns (the 100th anniversary of whose death falls within this year as well) and George Bizet's CARMEN in Charlottenburg.

Starting in 1916, Blech began recording numerous records with the orchestras of both opera houses, but also with the Berlin Philharmonic and the London Symphony Orchestra.

After Blech's position as General Director of the Staatsoper had been secured by order of Hermann Göring, despite his Jewish heritage and after the "takeover", he was first "placed on leave" in spring 1937 and then dismissed "due to age". 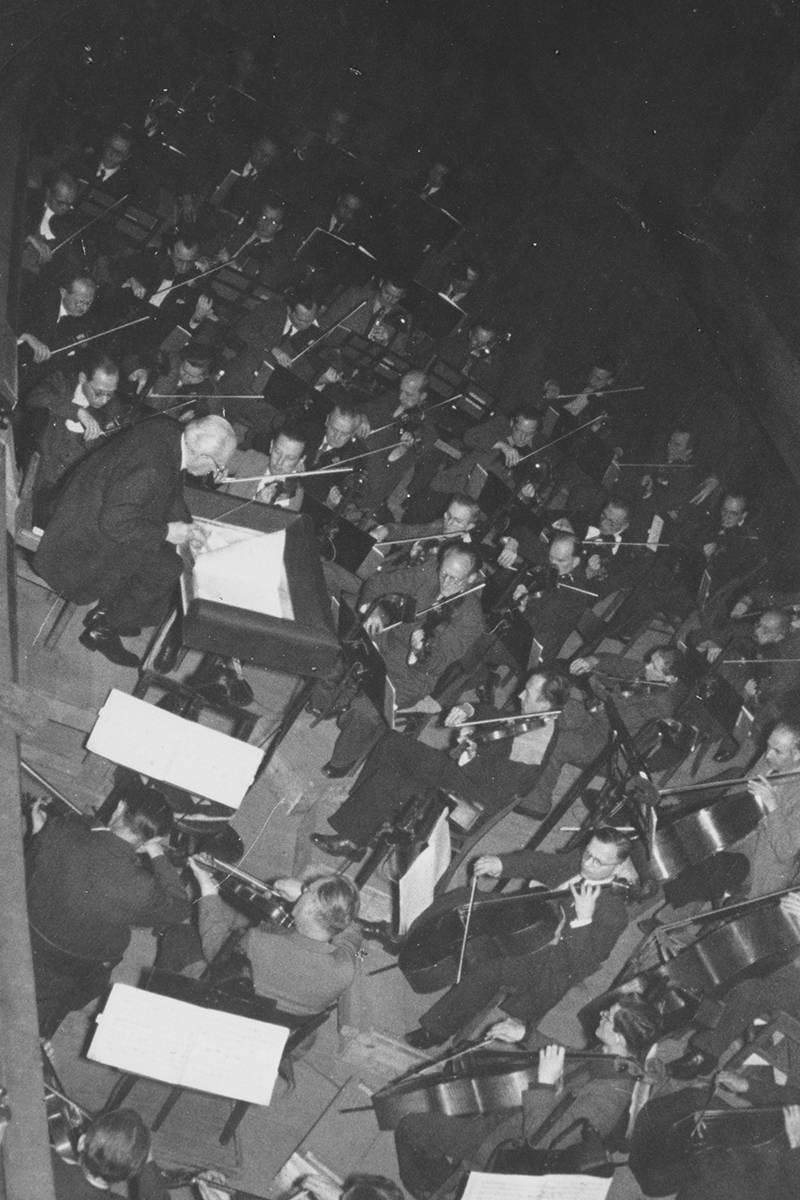 Breaks and continuities marked Blech's remigration in 1949. Although his long-time supporter Tietjen called Blech back to his "artistic home" in May 1945, no contract with the Staatsoper materialised. Other contemporaries, such as director Boleslaw Barlog – whose staging of TOSCA has been a key part of the Deutsche Oper Berlin's repertoire since 1969 – sought to contact Blech. Yet the years of destruction could not be undone, and Blech needed time to think.

When Tietjen took on the position of director at the Städtische Oper in 1948, Blech returned at Tietjen's behest. He had asked Blech to clean up the "terribly unkempt" orchestra", because "it will take the hands of a Leo Blech to return the sounds of the piano and precision in the woodwinds and brass, of that I am certain." 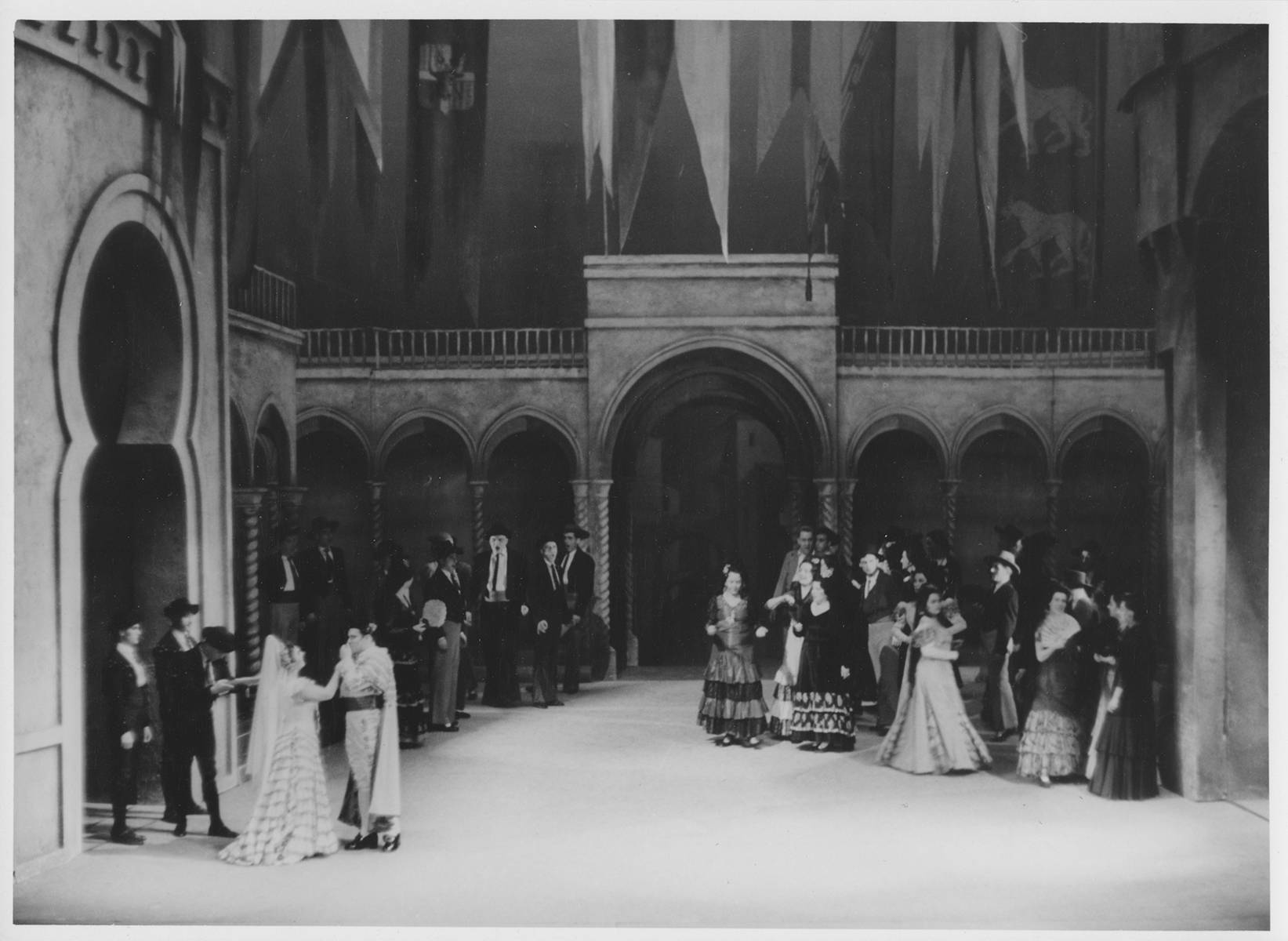 On 18 October 1949 at the Theater des Westens – due to limited space and presence of the treasured conductor also known as the "Tin Can", a pun on his last name which is German for "tin" – where the ensemble played until the opening of the new building in 1961, namely CARMEN (a work Blech conducted more than 700 times but to which he had no "special connection". To quote Blech, "I don't know the lady personally." Blech directed it himself on his triumphant return in 1949. 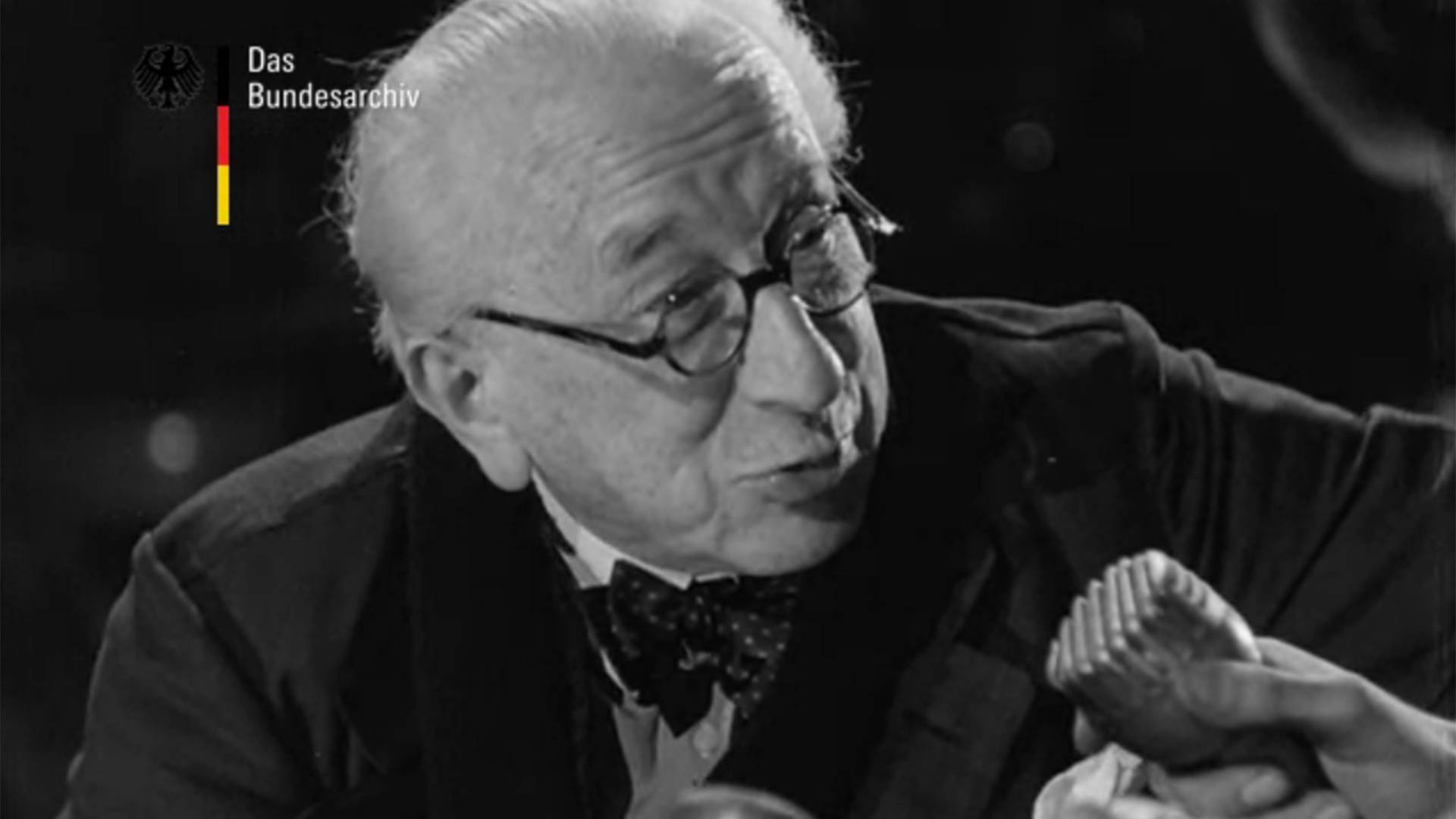 The Welt im Film from 1 November 1949 contains excerpts of the 4th act and an interview with the 78-year-old Blech. (starting at minute 8:23) ... To the archive video

Worth noting are the performances of two of his own comic operas, VERSIEGELT and DAS WAR ICH, on the occasion of his 80th birthday on 21 April 1951 (for which he also received a professorship at the Hochschule für Musik), personally directed by Heinz Tietjen. 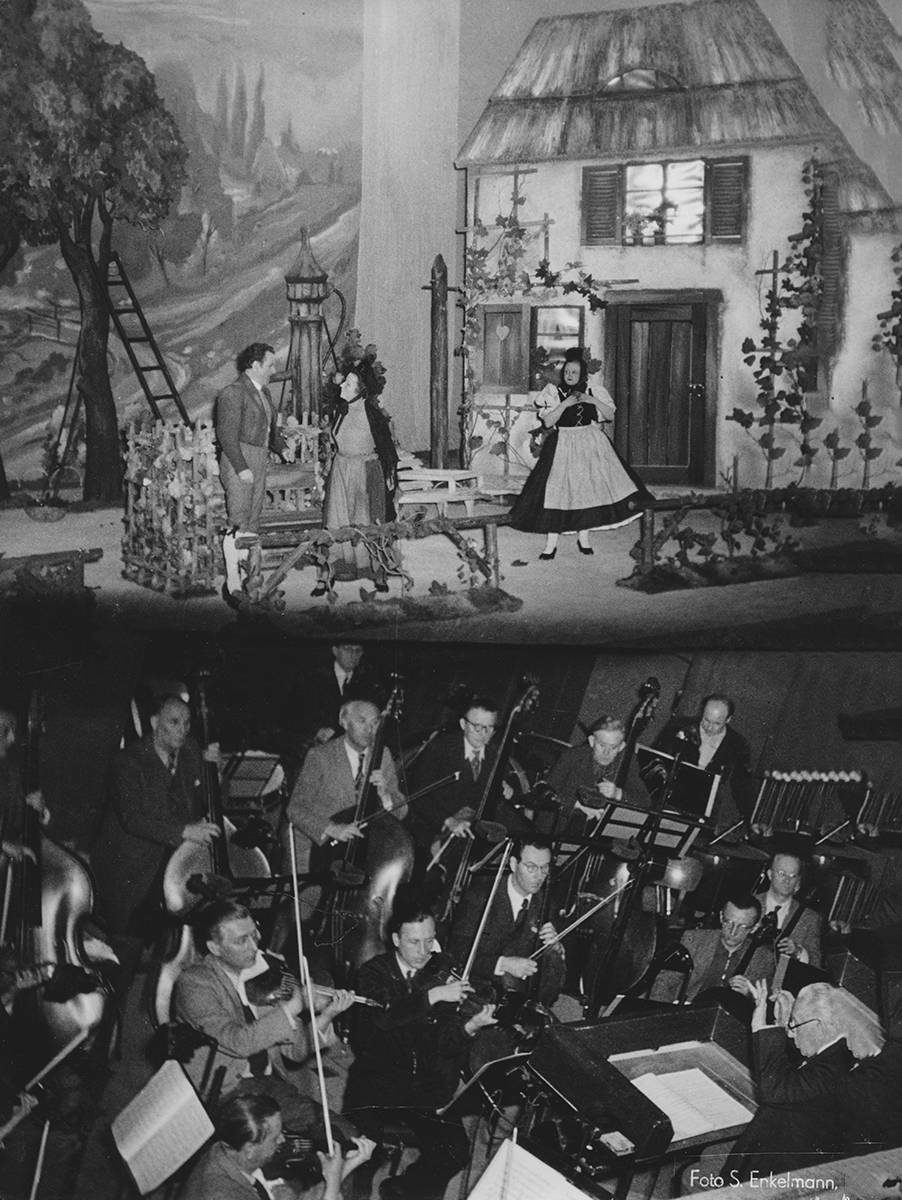 DAS WAR ICH © S. Enkelmann, DOB, archive
+++ Blech discusses his works in an interview on the evening before the premiere +++

The same precision that Blech demanded from his orchestra and singers also defined his own efficient rehearsal style and conducting, perfected over many years of experience, according to reports and recordings. Yet he also was capable of maintaining this high level of musical prowess beyond the premiere, including for repertoire presentations.

Blech entered his second, and this time voluntary retirement in 1953 after falling at the podium during a performance (again during CARMEN): "After 62 years of strenuous work, I had the right to stop," he said.

This very special artist, whose career spanned across multiple eras, would certainly have been pleased to see us celebrating his 150th birthday. Yet he, by this point up in age, once complained to a reporter from the Radio-Revue, "I'm somewhat of a skulker now, and sometimes I feel that posterity weaves no garlands for imitators. I don't know to what extent this is posterity and to what extent this is modernity." 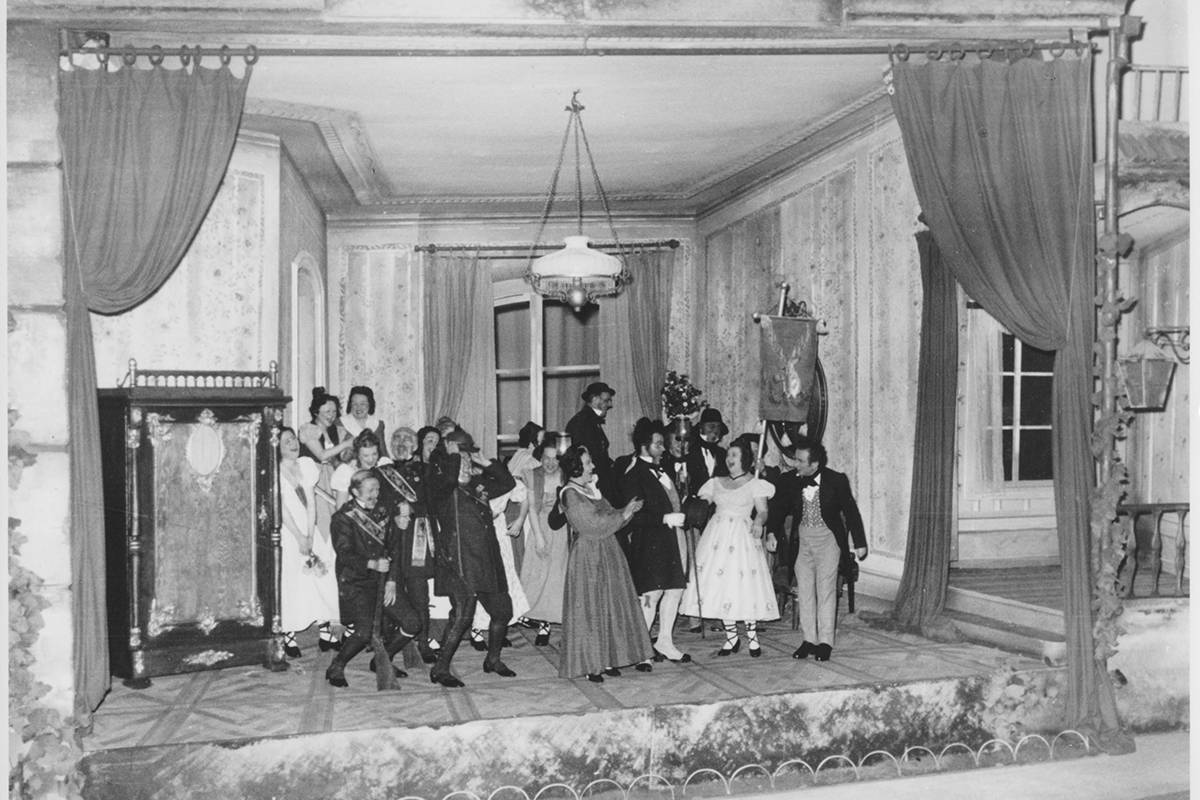