Meechot Marrero: My source of serenity … The Crispy Döner beside the Deutsche Oper Berlin

Berlin was quite a culture shock to Puerto Rican soprano Meechot Marrero when she arrived in the city six years ago. And one place in particular took her fancy early on: the doner kebab bistro outside the Deutsche Oper Berlin

My private place of respite is the Crispy Döner across from the Deutsche Oper Berlin. I’ve known the place ever since my first day in Berlin – or my first night, to be precise. Everything had happened so fast. In 2016, on the back of an audition in New York, I got a grant which landed me at the Deutsche Oper Berlin. I had three days to think things over, but I always knew I couldn’t pass up the chance. I was born and grew up in Puerto Rico, and I didn’t even own a winter coat until I arrived in New Haven in the US to do my Master’s; we don’t have seasons back home. And suddenly I’m in Berlin and, like, I don’t know a word of German. A huge adventure!

I touched down late at night and only knew that my flat was just across from the opera and I had to pick up a key and a chip card from opera security. And, of course, the guy on the gate couldn’t speak English. So, after some mouthing and gesturing to no avail, I drew a key on a bit of paper, and bingo! I only had to haul my luggage across Richard-Wagner-Strasse – and that took me past the gaudily lit Crispy Döner on the central reservation. I remember thinking: Fine, however bumpy my start in this new city, on this new continent, is going be, and however much I have to communicate in sign language, at least I’ll be able to grab a bite to eat at any time of the day. The thought soothed my nerves a little. 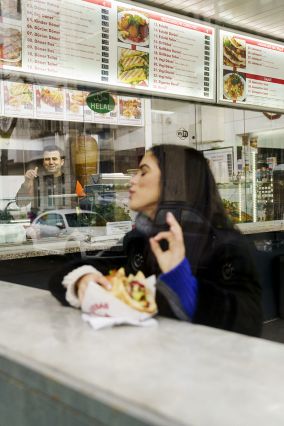 Scrumptious! Marrero tucks into a doner kebab at the counter of her favourite takeaway. Vendor Şevket Bayram is on first name terms with the singer – and is always up for a chat © Max Zerrahn

It was at that little outlet with the glass frontage that I ordered my very first food in Berlin. And it was such a great experience that I’ve been coming here regularly ever since. For a while, my small radius in Berlin was marked by the opera house, my flat on the third floor of the green building across the road, the Crispy Döner between the two and a supermarket round the corner. It was all I needed and all I could have coped with anyway, seeing as I was at once up to my eyes in projects, rehearsing and singing on stage. I was in my mid 20s, fresh from university and singing in major works of the repertoire: CARMEN, THE MARRIAGE OF FIGARO, HANSEL AND GRETEL and the like. I felt like I’d leapfrogged a few developmental stages. The Deutsche Oper was a stroke of luck for me. I know full well how many young sopranos are aching to sing at a house like this, and I’m still grateful to have got the chance – even six years down the road.

I’ve lost count of the times my little takeaway joint has saved me from starving since those intense early days, after a performance, late at night, with the restaurants closed and me needing some fast food to eat at home. Or in a brief break in a hectic rehearsal, when I need to get out of the building and clear my head. The kiosk location is ideal for someone who spends most of her waking hours in the building next door.

I suppose it’s in my nature that I like chatting with people. I gradually got to know all the vendors and the hours of their shifts. Not that we became really close friends or anything – our contact was limited to the short time I spent outside the Crispy Döner. It wasn’t long before they all knew I sang at the opera and I knew how their wives and kids were doing and what they’d done on the weekend. The atmosphere was so nice that the little container between my flat and opera house started to feel like a ‘home from home from home’.

One evening after a performance of THE MAGIC FLUTE about two years ago I went across to get a bite to eat and one of the vendors was standing next to the kiosk all tarted up in a smart shirt. I wanted to pull his leg, so I said: »What have we here? Off on a date after work?« He just smiled and asked: »How old are you, by the way?« »Thirty,« I replied, a little wrong-footed. And he smiled even more broadly and went: »Nah, no way. You’re maybe two minutes past your 18th birthday.« 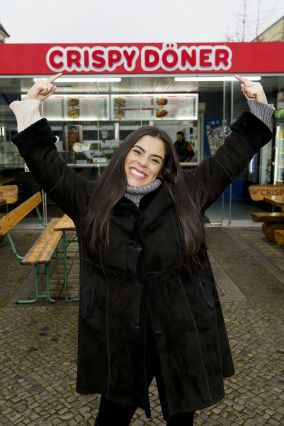 Cosy, comfy, convenient… Despite the bustling location on a crosswalk bordered by roads on three sides, the wooden benches and tables are often packed on a summer’s day © Max Zerrahn

It was a quote from THE MAGIC FLUTE. That’s the age of Papagena, the role I was playing. Without letting on, ›my‹ doner seller had bought tickets and attended a performance with his wife – for the first time in his life. And there he was back at the Crispy Döner after the show, working his shift in his ironed shirt. I felt a bit emotional.