A place of serenity for my soul – Frank Castorf

Frank Castorf was Artistic Director of the Volksbühne from 1992 to 2017. He is now making his debut at the Deutsche Oper Berlin with Verdi’s LA FORZA DEL DESTINO. Here he takes us to a very special crossroads in the city.

In that building over there on the corner of Pappelallee and Stargarder Straße my father had an ironmongery. My great grandparents set up the business in 1899 and my grandparents lived on the first floor. This crossroads played its own little part in the history of Berlin – or in hoping briefly to change the course of German history.

It was May 7th 1945, one day before the end of the war. A bunch of people suddenly had this whacko idea they might be able to save the Reich that was by then clinging on by one fingernail. The last remaining German tanks came through here, heading for the legendary army commanded by General Wenck, an army that lived on only as a hallucination in the mind of Adolf Hitler and which was going to rescue Berlin from the advancing Russian army.

The SS thought my grandparents’ bay window would make a good vantage point from which to halt the Russian T-34 tanks that were advancing behind them into the city from the north. My grandma knew that one shell from a T-34 would obliterate everything and she beat them out of there with her broom. She’d hidden my dad in a grandfather clock in the cellar, like the story of the wolf and the seven young goats. My dad was seriously wounded and had deserted a few days earlier. My grandma protected him from the rabid fanatics of the Wehrmacht and afterwards from the Russians.

Thirty years later I was rummaging in the cellar and came upon some old Solingen steel knives, wrapped in paraffin paper. They were still sharp. Good old German manufacturing – the other side of the tragic German coin.

This location is suffused with my memories of my father. He died a few years ago, not long after he’d wound up his business. I’d always known I’d never take it over from him, and he knew it too. I often carry around the crocodile-leather bag I gave him. I’ve always avoided the shop. It had this musty smell and was cold, and I feel the cold. It was like the cold of a tomb wafting up. In the run-up to New Year my parents used to sell fireworks and when I was eight, nine, I had to monitor the door to the shop to prevent people from jumping the queue, which was hundreds of metres long. It was really embarrassing.

The crossroads bore the traces of wartime fighting until the fall of the Wall. History left scars on the architecture. Machine gun pockmarks, living testimonies to the war. Pappelallee had an asphalt surface that even survived the passage of Russian tanks. It meant we kids could use roller skates on the gradients. We explored bombed-out houses. The joys of childhood and the bleakness of ruins. 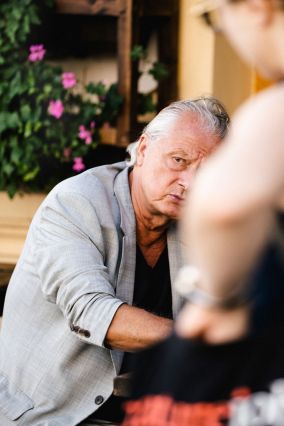 When I was a boy the borough was home to people from all walks of life. In the front building facing onto the street you had the government functionaries, army personnel, people who were reasonably off, people like my grandparents. As you went further back through the yards the living conditions got more and more basic: tiled stoves for heating, one-room flats, shared toilet in the stairwell. In the ‘70s and ‘80s the artists moved in. Workers rubbed shoulders with poets and musicians. Back in the day you might catch a glimpse of Heiner Müller or David Bowie in the street. We had amazing parties, with bands like »Ton, Steine, Scherben«. Loud parties, illegal, anarchical, »Keine Macht für Niemand«

The thing about Verdi’s LA FORZA DEL DESTINO is that everyday life barges in on the highbrow art of opera. It’s war, war, war. With Verdi you’ve got Spanish troops fighting the Habsburgs. He has a weird way of describing the war. In one scene you’ve got a gypsy woman singing »War is the best thing ever. We’re so proud of the war!« With Verdi the destruction of war is reflected also in the particular aesthetic they used in writing operas. Verdi blurs time, the storyline, the location. And I travel with Verdi to the Naples of 1943, to the world of the writer Curzio Malaparte, who wrote a novel entitled “The Skin” which depicted the landings of US soldiers in Sicily. And the overthrowing of Mussolini. And how Italians who were in the anti-fascist resistance suddenly came to betray their brothers, daughters, mothers. It’s Sodom and Gomorrah out there. And that’s what liberation can look like. According to Malaparte, sometimes it’s harder to endure liberation than endure occupation.

I’m interested in this kind of brutality, which is why I’m drawn to material like this. But I’m quite aware that Verdi wasn’t after the organic side of relations; he was interested in the disparate aspects. The music is so lovely, yet Verdi wanted to jog people’s attention. For me, these wars are one and the same – literarily, historically, associatively the same.

The ripples of the First World War can still be felt to this day. You had the French and English drawing borders on the map with a ruler and creating countries like Syria and Iraq. That’s why in this Verdi production, too, you can expect to see the Second World War reflected.