A place of serenity for my soul… Thomas Blondelle

Thomas Blondelle, tenor, sings Eisenstein in Strauss’s THE BAT. Here he describes the joy of living deep in Belgium’s Ardennes region – and singing to deer.

I spend a lot of time in towns, rehearsing in gloomy rooms, always surrounded by people. I’m hardly ever at home. As an opera singer, I’m sometimes away for seven, eight weeks at a time, and that’s just working on new productions. All told, I may spend about two months a year at my cottage. That may sound like not very much, but I only need a few days to unwind completely. Actually my house is a bit like a holiday home. It’s in the Ardennes, in Belgium, on the outskirts of a tiny village of about 100 inhabitants. There’s nothing but woods for miles in every direction, and it’s utterly peaceful. When I look out the window, I see cows, horses and sheep. It’s exactly the contrast I need to my other life.

The job I do has its difficulties. It’s really hard to have a private life. The upside to that is that I can choose where I live, because I’m always on the road anyway. So I opted for a locations that’s good for my soul. I often went to the Ardennes with my parents and I was always very happy here. The people in the village here know me as “le chanteur”, the singer. To them, I’m exotic. The farmers can’t get their heads around how I manage to make a living from singing. I won this major Belgian music competition once and was in the paper and on the telly. Everyone in the village was proud of me and I got an invitation from the mayor. 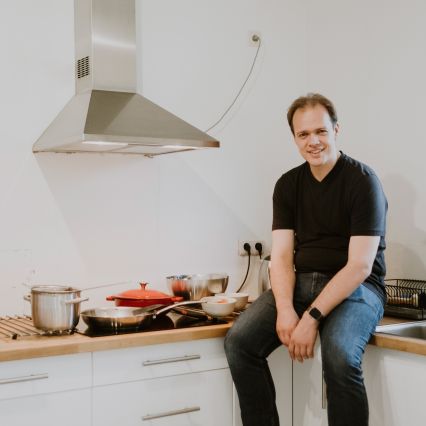 Thomas Blondelle in his kitchen, where he likes to cook unmolested. His menus are designed to tell stories – of his travels, among other experiences. © Sarah Bastin

When I’m here I cook for friends. I don’t let anyone near me in the kitchen. They can look, but they’d better not meddle. I like standing there at the stove with my friends sitting at the table, chatting, and me putting some dish together. I always cook several courses. The idea is to tell stories through menus. Stories of my travels, for instance. Last year I spent four weeks touring Japan. The trip inspired me to look at food in a different way: how do the Japanese cook, what’s their attitude to food, how do they present their dishes? My native cuisine, if you like, is French – which people tend to make a song and dance about. There’s a lot of fussing around: a dollop of cream here, an umpteenth spice there. Japanese cuisine is all about respecting the natural ingredients, without all the frills.

I swot up on new roles here, in my house. Sometimes I sing at the open window and if a farmer chances by, he looks over in my direction. Or I go for a walk in the woods, quietly singing whatever I’ve been studying at my desk. Sometimes I see a deer and it pricks up its ears, as though it’s listening to me. And once a year I do a bigger trek, further than the woods around my place: I pack a rucksack and hike a hundred or so miles of long-distance trail. 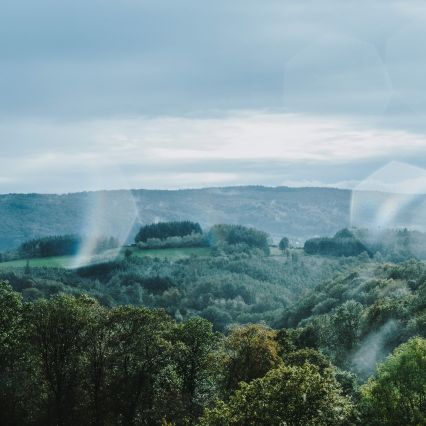 Woodland as far as the eye can see – tenor Thomas Blondelle’s description of the countryside in which he feels at home: the forested hills of Belgium’s Ardennes region. © Sarah Bastin

Ideally, opera succeeds in sending people home as altered beings. That’s something worth sweating to achieve. I, too, grow and develop singing the roles I do. I frequently find I’m getting parts that let me grow as a human being.

In Strauss’s THE BAT at the Deutsche Oper Berlin I’m singing Eisenstein. He’s totally taken up with his own pleasure. He’s a hedonist, selfish and egocentric, although actually all he wants is to be happy. Act 1 of our production is set at the end of the 19th century, Act 2 around 1960 and Act 3 in the future. The director, Rolando Villazón, once referred to it as “Bat man forever”. However far you go back, there’s always been this misconception that we can find happiness and meaning in unremitting entertainment. But I’m of the belief that each of us has to dig deep down inside ourselves if we want to hit upon the meaning of life. Even if THE BAT is »just« an operetta, we’re still exploring these big, existential issues.

Towards the end of the season Stefan Herheim is directing Wagner’s THE RHINEGOLD, in which I sing Loge. He may only be a demigod, but he’s clever enough for the gods to need his services. He’s sort of a diplomat, a jack of all people and master of none. He never takes centre stage, is always observing from the fringe, making fun of people who are brought low. Obviously that kind of role is a gift for any singer. You might think that it’s quite an ask – acting-wise and singing-wise – to go from a character like Eisenstein in THE BAT to Loge in THE RHINEGOLD, but in actual fact it’s always me, Thomas, up there on the stage. In my view it’s a myth that you suddenly change from one kind of actor or singer to another onstage. I always ask myself what I would do in such and such a situation. What can I show, based on my experience of life so far? That’s the only way you’ll be convincing in the role, in my opinion. Even when the character onstage ends up murdering someone, which is something totally removed from my life experience, everyone of us can relate to the emotions that push a person to do something like that.