With their backs to the opera 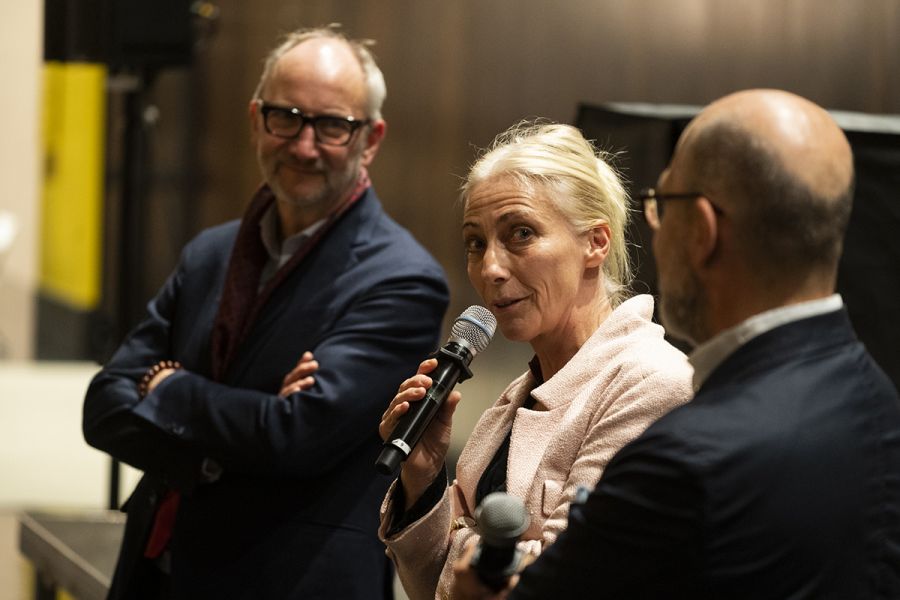 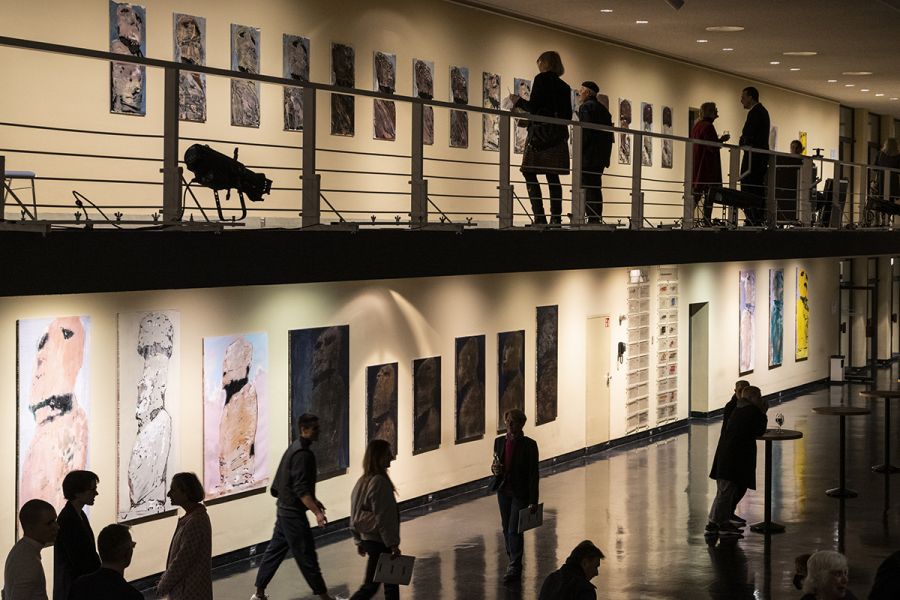 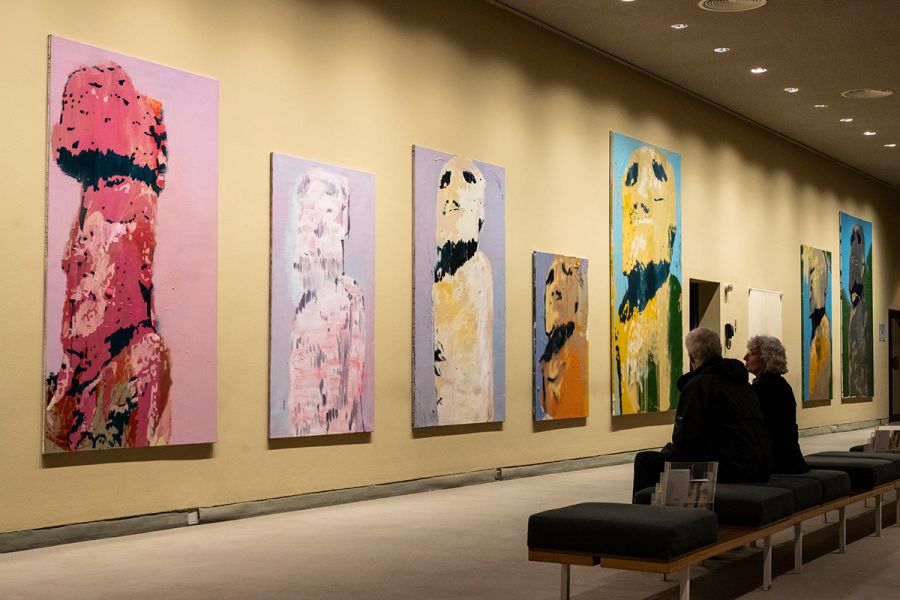 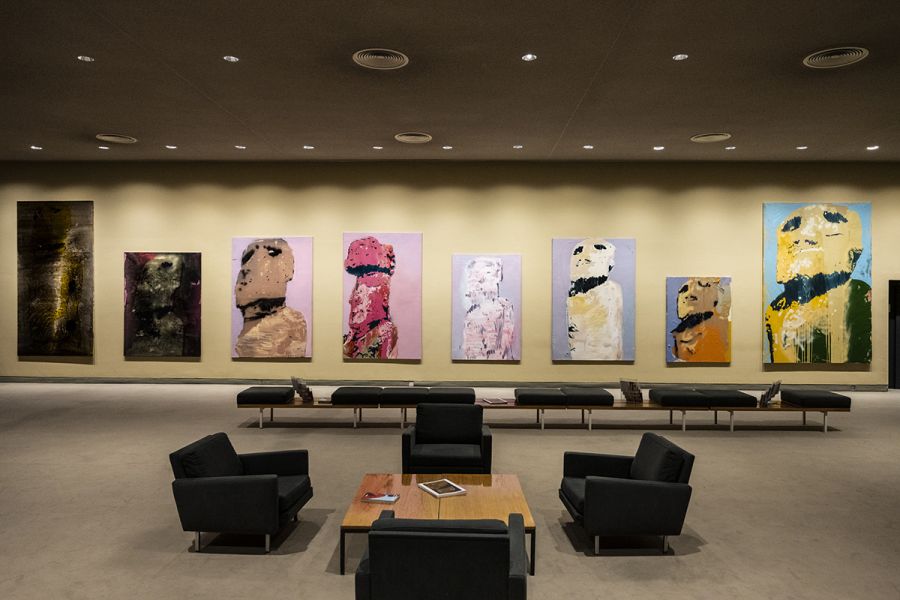 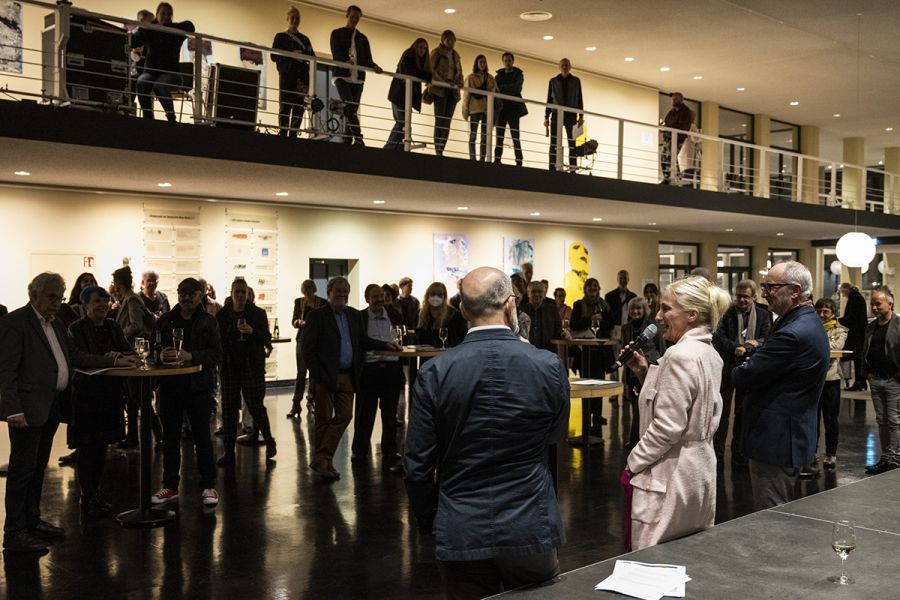 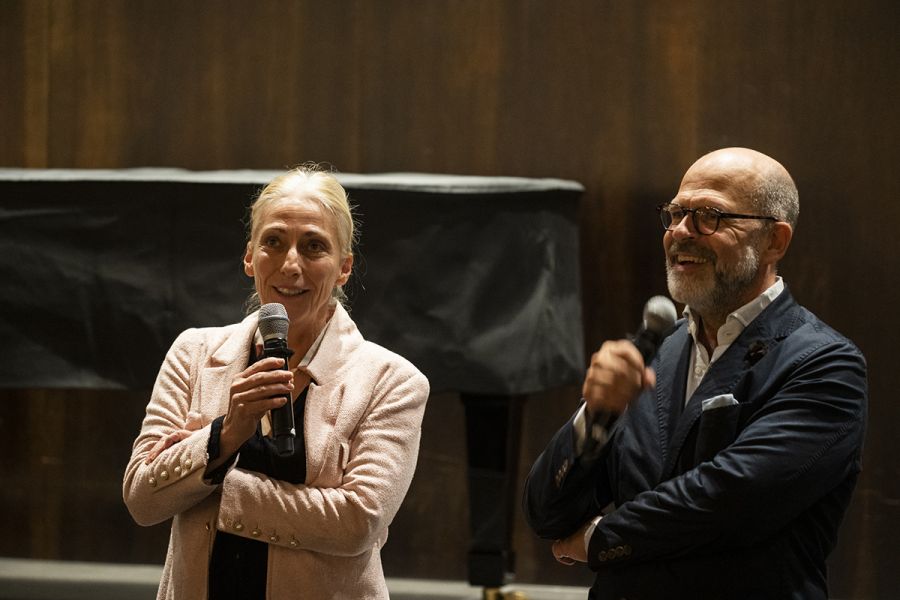 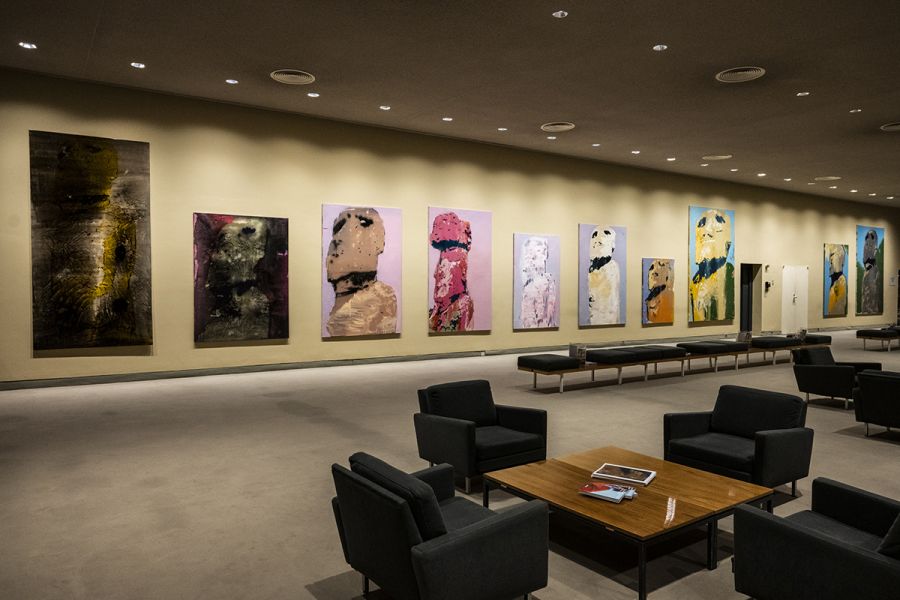 Check in: Die Ausstellung in den Foyers © Marcus Lieberenz
back

As powerful, artistic portrayals of the people who hewed them, the Easter Island steles have acquired iconic status. Can you describe the effect that these statues have had on you?

I saw the stamp that a friend had got in his passport when he left Easter Island. It was in the shape of a moai profile, instantly recognisable as such. Surfing the web, I found that the most common photo of my IP location was of an ahu supporting six of the mystical statues, of varying sizes. I chose that photo to serve as the basis for my Akku-Akku paintings, to harness the established and widespread appetite for tourism.

In Dummy_Akku-Akku you focus on two steles in particular, creating two rows of variations. To what extent is the interaction between the two groups important for the series as a whole?

There are 6 variations of the moai on the Tongariki Ahu, (https://de.wikipedia.org/wiki/Moai), which I painted based on the photo uploaded to that web page. There came a point where I decided to flip the photo to produce a mirror image and give me a better idea of the island. So now some of the pictures are looking to the left and others to the right.

The pictures were produced over an extended period between 2014 and 2022. Is that a finished project for you now or do you see them as a motif in your ongoing trajectory as an artist?

The Akku-Akkus remain an underlying theme for me; they protect all my other painted works – cars, aeroplanes, containers, pictograms, and the like – insofar as we see them as an interface between two high cultures, one bygone, one modern. I like painting the Akku-Akkus, especially because of the way it triggers something kind of spooky in me. I find myself dreaming about them at night, which is not something that happens with other subjects of mine.

What’s your process for creating a series? Do you have a holistic idea of the end result from the start or is the realisation that the project is finished suddenly there?

A series is an accumulation of one particular kind of thing, and I’m fascinated by that. I may be looking at 40 trees that are all the same, but that doesn’t mean they’re identical. In my private way of viewing the world I find the idea riveting that differing conditions engender variations on that particular theme – or, going one better, I’d say they engender mistakes – and this despite having the same core characteristics. So the series is complete when I’m at the end of my discovery, and I don’t get the impression that this one is finished yet. The last Akku-Akku I painted, ‘On Oath’, is raising his hand to swear the truth of what he’s about to say. This picture is much blinder than the other Akku-Akku portrayals. Painting a picture that is not there, but which is seen nonetheless, is something that fascinates me in the same way that Monet’s Water Lilies series does.

Each picture has its own title and some of the titles form their own cluster. Some titles such as Mandarine and Gold have a direct link to the materiality of the motifs, but some – like Faith in Strangers or Luxury Problems – are more obscure. How did these titles come about?

Sometimes I rebel against a connotative title that distracts from what’s in front of our nose. Other works get given an auxiliary title that reminds me of what was going through my mind when I created the picture – for instance the moment of deciding that the picture is ready and complete. When you’re cooking a meal, there are metrics that determine when it’s done. With painting it’s different; only later is the painting given its title, like ‘Science & Industry’. I don’t come up with the titles myself; I just allocate them. Most evenings I spend four to six hours listening to music, and a lot of my titles are the names of compositions.

What led you to chose this series over others for the foyer of the Deutsche Oper Berlin?

The paintings are hung with their backs to the opera, in a direct allusion to the moai. They’re protecting whatever is going on behind them in the auditorium, a bit like the marshals at a football match, looking outwards towards the crowd.

In the foyer the moai look out to sea. The sea represents not Berlin or the world but the Here and Now.

Today we are giving away 2 x 2 free tickets for the performance of DIE FLEDERMAUS on 31 December 2022 at 7.30 pm. If you would like to take part in the prize draw, please send an e-mail today to marketing@deutscheoperberlin.de with the subject "Das 3. Fensterchen".

In 2018, the curtain rose on a new production of FLEDERMAUS directed by Rolando Villazón. For the busy singer, director, presenter and author, this production was a matter close to his heart, as he was able to play with comic elements in Strauss’ master operetta on the one hand, but also give space to the melancholic and thoughtful on the other. For Strauss's operetta is about cheating, underground parties and the beguiling power of champagne, but also about the description of social facades and above all the abysses that lurk at the back of the bourgeois salon. And because there is always betrayal, partying and drinking, Villazón sets the three acts in three different times and takes the audience on a journey from the 19th century through the 1950s to the future.

It was already a novelty in 1874 at the Theater an der Wien that the waltz king Johann Strauss presented a plot that was not set in mythical faraway places or in fantasy states, but took the upper middle-class salon as its starting point. The bourgeois audience saw itself, with all its conceit, its double standards, grotesquely distorted on stage. The story was not new, of course: Strauß and his collaborator Genée drew on a French tabloid comedy by the Offenbach librettists Meilhac and Halévy, but supplemented it with piquant details. For example, the appearance of the disguised Rosalinde at Prince Orlofsky's ball. In general, the intensification and centring of the plot on the masquerade party with the final homage to alcohol, the general fraternisation and the champagne-loving du-i-du is due to Genée. Otherwise, the farce about cheating has all the ingredients of a good comedy: The rebellious chambermaid, the hidden lover, the self-adulterous but jealous husband and the disguised countess.