Rienzi, the Last of the Tribunes as Video on Demand from 1 to 4 April 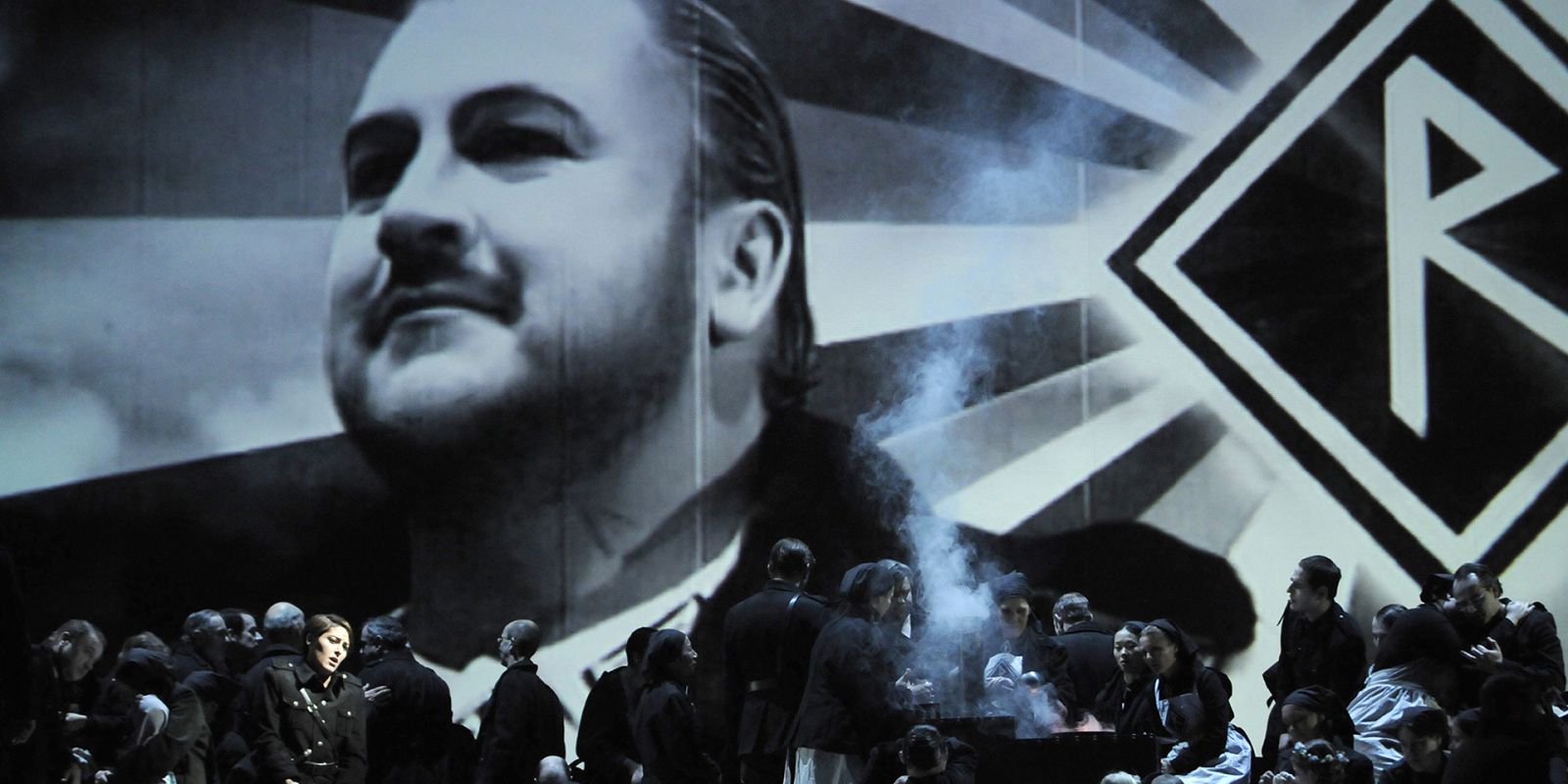 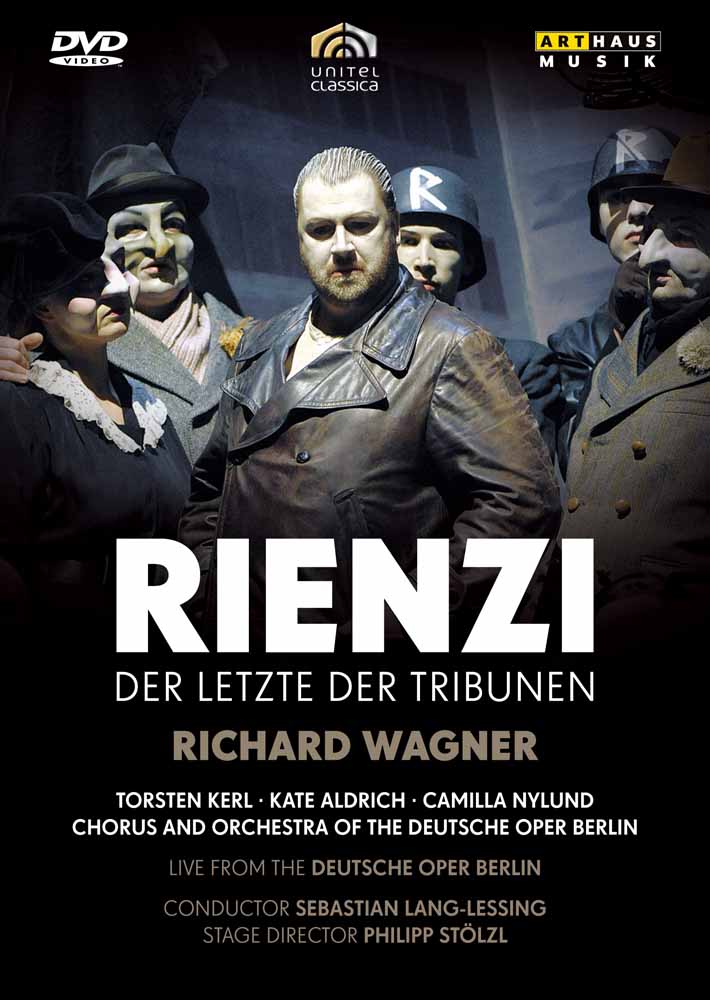 Richard Wagner
RIENZI, THE LAST OF THE TRIBUNES
We would like to thank the Unitel label for kindly granting us permission to broadcast the film. A DVD of this production is available in stores, for example in the
Amazon-Shop

Opera in five acts by Richard Wagner
Poem by Richard Wagner, based on the novel
Rienzi, or The Last of the Tribunes by Edward George Bulwer-Lytton
First performed on 20th October 1842 in Dresden
Premiered at the Deutsche Oper Berlin on 24th January 2010

2 hours 34 minutes / No intermission
With German and English surtitles 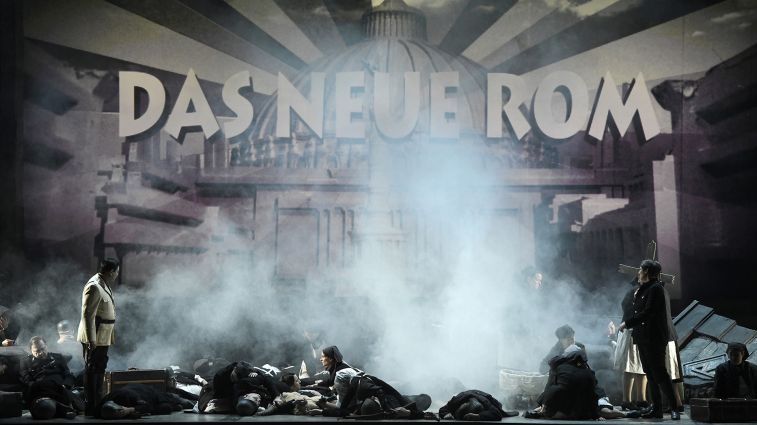 Watch our trailer for Richard Wagner's RIENZI here and gain first impressions of Philipp Stölzl's production. --- Here you will find our short trailer

In a Rome wracked by the private interests and clan struggles of feuding aristocratic families the charismatic idealist Rienzi, leader of a group representing the citizenry, is working for liberty, justice and peace, intent on seeing Rome reclaim its past stature. He enjoys the trust of the Church and people. Although he declines the trappings of royalty he accepts the post of People's Tribune, nurturing “great thoughts in mind and heart” (Wagner). His consuming desire is to restore to the Rome he loves so dearly the internal peace and greatness of a bygone era. With the support and empowerment of the Church he pledges to work alongside a legislative senate to uphold the rights of the populace. However, the nobles' subordination to the new political system and its representative is feigned. A first assassination attempt on him is foiled and the ringleaders face the death penalty. Adriano, son of one of the conspirators and the lover of Rienzi's sister, is caught in the crossfire. He pleads with Rienzi to spare his father. Rienzi finally appeals to the people to join him in his decision to spare the lives of the assassins, and he prevails, but peace is short-lived. The nobles break the oaths of loyalty demanded from them by Rienzi and continue to agitate against the Tribune, who this time quells the unrest only at the cost of much bloodshed on both sides. The populace's loyalty to its Tribune is wavering. When Rienzi attempts to extend the power of Rome beyond the borders of the city the Church withdraws its support. This marks a turning point in Rienzi's fortunes; the saviour of the city becomes the scapegoat for Rome's woes. The people call for their one-time rallying figure to be stoned and burned. Before he dies Rienzi curses Rome and threatens to draw it down with him to share his doom.

RIENZI, Wagner's fourth opera, was the work that established his reputation. Long a popular work among audiences, RIENZI all but vanished from opera house repertoires after the Second World War. Hitler himself had made close associations between his own actual and envisaged biography and that of the eponymous hero and mentioned a performance of the opera in Linz in 1906 or 1907 as being the inspiration behind his later strivings. Posterity distanced itself from the work, unable to dismiss as trivial the parallels, despite the fact that the two figures were connected less in their biographical details as they were by a common vocabulary, a shared claim to power and redemption and a potential for violence that threatens to tip abruptly into an unbridled urge to destroy.

[Romans], masters over all peoples, you had been subjugated; your barons were born in foreign lands, coming from the Rhineland, from the Rhône, from Spoleto. They had people address them as »Sir«, something that even the Emperor Augustus – who really was master of all peoples - had refused to tolerate. Now Rienzo has become the third Brutus, the third liberator of Rome from bondage … All hail, dear Camillus, dear Brutus, dear Romulus, or whichever name you choose to go by. All hail, forger of Roman liberation, of Roman order, of pax romana. The present thanks you for enabling her to die in freedom; dynasties of the future thank you for enabling them to live.
Francesco Petrarca

With his RIENZI Wagner, who took his material from the novel by Edward Bulwer-Lytton “Rienzi, or The Last of the Tribunes”, is building musically and thematically on the French tradition of grand opéra while aspiring to outdo this genre in its music and on-stage action. The romantic notion of the lone, superhuman hero brought down by an uncomprehending society is already present in RIENZI. It forms the core of the cosmos developed by Wagner in his later works, a cosmos conceived for human beings and then endowed with an extravagant mythical dimension.

“I implore you to guard against destroying, with your own hands, everything about your fame that is admirable. No one but you can tear down the foundation on which your deeds are built; as you have laid this foundation so you can destroy it - the architect is always the best destroyer of his own work. You are fully aware of the path you trod to fame. The same path is descended on the return journey, and the downward gradient is easier to follow…
So, while there is still time, always be mindful of the words of the lad outside Terenzo. Weigh very carefully what you do, scrutinise your motives, think deeply, and do not deceive yourself over who you are, who you have been, where you come from, where you are going and how far one can go before losing freedom, nor over the position and office you have taken on, the hopes people have placed in you and the promises you have made: if you do all this you will see yourself not as master of the Republic but as its servant.” (Petrarca to Rienzo, Genoa 1347)

The plot, summarized for you

Civil war in Rome. Two clans, the Orsinis and Colonnas, are vying for power.

The Orsinis and Colonnas have Irene in their sights, the sister of Rienzi, a demagogue. Adriano, son of Steffano Colonna, takes Irene’s side and gets caught in the crossfire. A cardinal tries to pacify the Romans. Rienzi appears with his entourage, which includes Cecco and Baroncelli. Invoking Rome’s former stature, he appeals to the populace to lay down their arms. For Rienzi, the outlook for the Eternal City is rooted in its glorious past.

The Church gives Rienzi carte blanche to pursue his objectives. The Romans pledge allegiance to Rienzi. Adriano is hesitant: he is in love with Irene and supports her brother in his political aims, but is nervous of what might happen if Rienzi were to be given the reins of power. Rienzi manages to secure the support of Adriano; Irene welcomes Adriano’s attentions and protection.

The people are weary of the upheavals and look forward to an end to despotism and a state governed by the rule of law. The Romans vow to take up Rienzi’s struggle to liberate Rome. Rienzi declines the title of king; as people’s tribune he wants to share power with a legislating Senate. The populace is deeply divided but rally under Rienzi’s banner.

Colonna and Orsini are plotting to assassinate the tribune and brief Adriano on their plans. He is horrified at the underhand intentions of his father. Colonna tells him he must choose between betraying his own father or betraying Rienzi. Meanwhile Rienzi, having secured the support of the populace, announces his expansionist plans for the city.

Adriano thwarts the attempt on Rienzi’s life. Cecco and Baroncelli call for the ringleaders and their followers to be put to death. Adriano entreats Rienzi to spare his father. The tribune appeals to the people to overturn the death sentence and they duly place the fate of the traitors in his hands …

War. Rienzi succeeds in rousing the demoralized populace to arms. Adriano is still caught between two camps. The people mourn their dead from the skirmishes fought at the behest of the tribune. Adriano curses Rienzi and vows to avenge the death of his father. Rienzi, the propagandist, appeals to the Romans to keep making sacrifices in the cause of liberty.

The situation is bleak. The Romans have suffered heavy losses. Public opinion turns against Rienzi, encouraged by Baroncelli and Cecco. The people accuse Rienzi of treason. Adriano sides with the conspirators and resolves to kill Rienzi.

Rienzi prays to God. Adriano tries to get Irene to flee with him, but she opts to share the fate of her brother. The tribune has lost his sway over the people. Rienzi is lynched and curses Rome and its inhabitants as he dies.

Deutsche Oper Berlin asks for your donation for the benefit of the Emergency Aid Fund of the German Orchestra Foundation, which supports freelance musicians in need who are currently unable to practice their profession due to the pandemic.