Opera brings to the stage characters and ideas that dispense with all pretence of rationality. Why does that rivet us so? Dramaturg Sebastian Hanusa on the fabulous and wondrous machine that is opera

Man, machine, doll? Olympia rises up as if by magic in Laurent Pelly’s production of LES CONTES D’HOFFMANN © Bettina Stöß
back

Opera delights and entrances us! And the works that affect us so keenly around Christmas don’t lose their effect throughout the rest of the year. Opera brings to the stage characters, dramas and ideas that dispense with all pretence of rationality. When the illusions factory that is opera starts to cast its spell, children’s eyes light up and the pulse begins to race. Yet it’s often the onstage action that is literally magical, even more so than the desired effect that it has on audiences.

Back in the infancy of opera, with Monteverdi’s ORFEO for instance, storylines were already exploring the idea of a deceased person returning from the realms of the dead. These resurrected ‘flatliners’ have been a fixture in the enchanting landscape of opera for centuries – along with assorted spells, magic potions, soothsaying, gods, metamorphosis, magicians of every stripe, all manner of animals and inanimate objects, and natural phenomena under human control. Even Offenbach’s LES CONTES D’HOFFMANN gives us modern ghost for the stage in the form of a vision of Antonia’s dead mother singing.

The gods of classical antiquity also featured prominently in early opera, with mythology remaining the chief wellspring of operatic material. The gods form part of a world in which natural phenomena are suffused with animacy, a world shot through with magic, not yet demystified by the Enlightenment. And it goes without saying that these gods have supernatural powers, which they exercise on stage, often functioning as a deus ex machina deploying magical strength to contrive a happy ending from the messy narrative of many a baroque opera.

Unlike his polytheistic antecedents, the Christian deity (in keeping with the prohibition on creating likenesses of God) does not appear as a character on the opera stage, although He may well intervene occasionally in the action of the story. And where God is apt to appear only as a »voice«, His satanic (and baritone) counterpart seems to crop up again and again.

From the 19th century onwards wizardry has tended to be employed on stage as a means to evil ends, which 20th-century psychoanalysis announced to be a cover for deep-seated human urges. Hoffmann’s antagonists in LES CONTES D’HOFFMANN are a perfect example of this, their witchcraft ensuring that the hero of the piece will not find love. And yet, in the dual fictions of this work, they may also be figments of his imagination, subconscious projections. It is through the lens of Hoffmann’s self-perception and view of the world, after all, that the audience is presented with the three tales.

And at the crux of Act 1 in particular we realise that, quite apart from issues of sorcery and extrasensory phenomena, the actual magic being performed in the story comes initially in the form of a man having his sense of reality toyed with. Hoffmann is wearing spectacles that distort his view of Olympia, the mechanised doll, so that he takes her to be real, when everyone else knows she’s fake.

So LES CONTES D’HOFFMANN is a work that, apart from featuring sorcery, is also about showing the process by which a person becomes bewitched – by having his perception manipulated, or by the device of presenting different ways of viewing the world using a character on the opera stage. 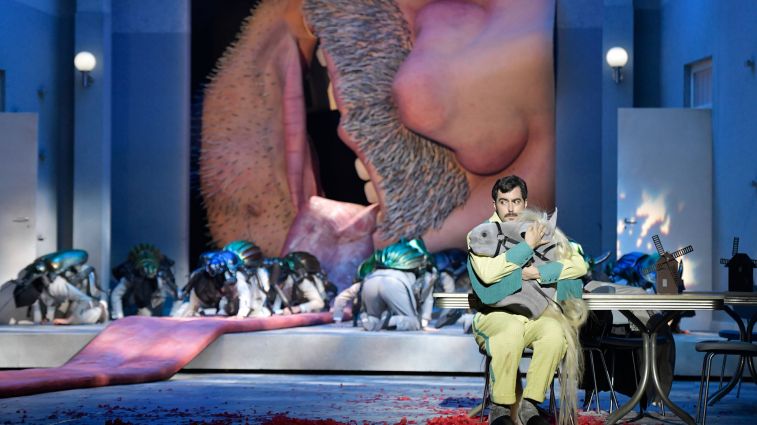 Jakop Ahlbom’s production of DON QUICHOTTE is a grand conjuring of dreams. Hardly surprising, then, that the Swedish director is a trained illusionist © Thomas Aurin

One work in which the question of how to perceive the world lies at the core of the story is Cervantes’s »Don Quixote«, as adapted for the opera stage by Jules Massenet. The protagonist is an impoverished landed gent, far advanced in years, whose lively imagination has the effect of altering his perception of the world around him. He sees himself as a youthful hero and lover. The arms of windmills become the arms of giants in his mind.

Now director Jakob Ahlbom, himself trained in the arts of illusion, has brought these fevered images to the stage of the Deutsche Oper Berlin. His conjuring tricks astonish, but Ahlbom also shows us how perception is what creates our very understanding of the world around us – and how this conception of the world can be altered, manipulated, how we can be deceived by it. But before we come to this realisation we must first be astonished. We gape at what can’t be true, at what cannot be. The reason why opera is so packed with magic is likely to be found far beyond all so-called »schools of perception«. Here on stage, for a brief moment, something that we know intellectually is beyond the scope of possibility becomes real and true. Opera bewitches. And from the sorcery a world emerges, But which world exactly? 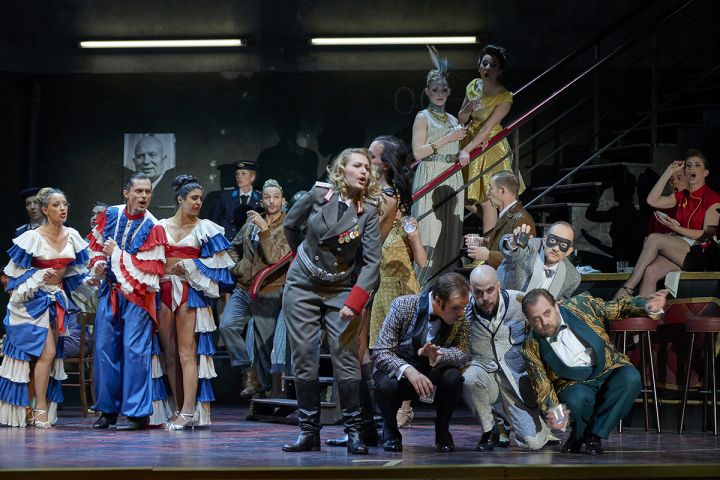 Today we are giving away 2 x 2 free tickets for the performance of DIE FLEDERMAUS on 31 December 2022 at 7.30 pm. If you would like to take part in the prize draw, please send an e-mail today to marketing@deutscheoperberlin.de with the subject "Das 3. Fensterchen".

In 2018, the curtain rose on a new production of FLEDERMAUS directed by Rolando Villazón. For the busy singer, director, presenter and author, this production was a matter close to his heart, as he was able to play with comic elements in Strauss’ master operetta on the one hand, but also give space to the melancholic and thoughtful on the other. For Strauss's operetta is about cheating, underground parties and the beguiling power of champagne, but also about the description of social facades and above all the abysses that lurk at the back of the bourgeois salon. And because there is always betrayal, partying and drinking, Villazón sets the three acts in three different times and takes the audience on a journey from the 19th century through the 1950s to the future.

It was already a novelty in 1874 at the Theater an der Wien that the waltz king Johann Strauss presented a plot that was not set in mythical faraway places or in fantasy states, but took the upper middle-class salon as its starting point. The bourgeois audience saw itself, with all its conceit, its double standards, grotesquely distorted on stage. The story was not new, of course: Strauß and his collaborator Genée drew on a French tabloid comedy by the Offenbach librettists Meilhac and Halévy, but supplemented it with piquant details. For example, the appearance of the disguised Rosalinde at Prince Orlofsky's ball. In general, the intensification and centring of the plot on the masquerade party with the final homage to alcohol, the general fraternisation and the champagne-loving du-i-du is due to Genée. Otherwise, the farce about cheating has all the ingredients of a good comedy: The rebellious chambermaid, the hidden lover, the self-adulterous but jealous husband and the disguised countess.