You stand beneath the treetops

Director Anna-Sophie Mahler sets up camp, brings the wood onto the opera stage and unlocks the secrets of trees 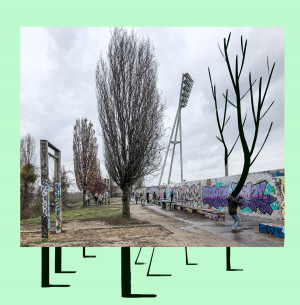 »In Richard Strauss’s DAPHNE the heroine gets transformed into a tree. I’m looking to do something similar in WALDESRUH. I want the audience to become one with the trees. To this end we’ve got an evening in store where everyone, opera staff and visitors alike, acquire a deeper understanding of flora and how plants go about their daily lives. We’re doing this as a matter of urgency, because we’ve got to a point where we’re only really destroying stuff now. Sometimes I just despair! The Amazon and Australia are on fire and in our neck of the woods the trees are succumbing to drought. Which is a pity, seeing that they could help us in our attempts to slow climate change down, because they transform carbon dioxide into a non-harmful gas.

»The natural world will be conjured up in the imagination: the soil, the mushroomy fragrance.«

To prepare for the project I read books by Peter Wohlleben. He writes about the way trees use aromas to repel pests, about how they keep debilitated members of their own species alive by nurturing them via their root systems, how fungal filigrees in the soil help trees to communicate with each other. I’m currently discussing the significance of all this with scientists and forest wardens.

I spent some of the summer under canvas at a very spartan campsite in Corsica, where it got really dark at night. The flipside was that you heard the wilderness noises of nature much more clearly through the sides of the tent. That was what spawned the idea behind WALDESRUH. Obviously there aren’t any trees in the opera; the natural world will be conjured up in our imagination. The soil, the mushroomy smell.

To this end we’ll be setting up camp with the audience in the Tischlerei. The Children’s Chorus will sing lieder by Brahms and von Eichendorff, both of whom have influenced our romantic way of viewing the forest. We also have actors quoting the latest findings relating to soil, deadwood, roots. The more we hear about the music, the more drastically the music shifts away from the Romantic school and towards new sounds. And we slip into the night.

So it’s getting dark and we’re lying on the ground and suddenly Morton Feldman’s ›Triadic Memories‹ strikes up, a work for piano that comes across as something from a long-lost world, a piece that’s ultra-quiet and delicate, a finely woven creation made up of sounds. It’s as if we’re listening to what the trees are saying. We sucked into their arboreal conception of time, where everything takes much, much longer to happen – not only the processes of perception and communication but also the storage of experience. We’re being transformed by an experience composed of music, light and space.«

Anna-Sophie Mahler is a director working at theatres and opera houses. In 2006 she founded Capri Connection, an independent drama company. The Basel-based troupe interweaves documentary texts, music and images