So much contra in this bass

Half jazz, half classical, half monster: »Epitaph« was meant to be Charles Mingus's magnum opus. But in the end it got out of control and Mingus never heard the finished work. Now you have a chance to hear this rarely-performed work.

It was the year that was to change the course of jazz. The Beatles and Stones were not yet on the scene, neither was pop music in general. Jazz was the go-to genre for cool. Suddenly, in the autumn of 1959, four seminal LPs were released – all classic works today: »Kind of Blue«, Miles Davis, »Time Out«, Dave Brubeck, »The Shape of Jazz to Come«, Ornette Coleman – and »Ah Um« by Charles Mingus, a masterpiece fusing gospel, blues, boogie and shuffle into a whole new sound.

The album instantly gave Mingus, a double bass player, a seat at the top table of jazz greats. Doubling down on his boldness, he followed it immediately with a partly scored, partly improvised suite for orchestra – written for two big bands and other orchestra instruments, all playing together. »Epitaph« was intended as a »3rd-way« work blending jazz with modern classical music reminiscent of Bartók and Stravinsky and also to mark Mingus’s personal pinnacle of creativity. The conductor Titus Engel now presents it on the Berlin stage. Charles Mingus himself never got to hear it.

The 1962 world premiere of the work in New York’s Town Hall was perhaps the biggest fiasco in the history of jazz. At the peak of his fame on the heels of »Ah Um«, Mingus had roped together 33 top-notch musicians including stars of the likes of saxophonists Buddy Collette and Eric Dolphy. Yet everything that could go wrong went wrong. Mingus wrote highly complex music but had scheduled only three rehearsals. Trombonist Jimmy Knepper took on the job of copyist, capturing on paper the notes that Mingus was producing. And Mingus kept on adjusting and adding and tinkering – and Knepper couldn’t keep pace. Mingus became moody and lost his temper, hating everyone and everything. Around that period he was quoted in the New York Times declaring a desire to emigrate, as the US had no room for black musicians. He started attending therapy sessions, weeping that the people around him were deliberately denying him his big break. The pressure was enormous, the record company wanted to make a live recording – unusual in those days, and untried.

On the eve of the concert Mingus was still not ready and summoned Knepper, demanding that he insert some new accompaniment for solos. When Knepper refused, Mingus punched him, breaking his tooth and calling him a white faggot and a traitor before rushing off to a last rehearsal at midnight. The musicians had lost all interest and couldn’t understand what he wanted anyway – and it was all reflected in the ensuing concert, with the orchestra lagging behind the soloists and the audience disillusioned. Mingus called his therapist, who was duly waiting for him backstage at the interval. A venue spokesman offered the assembled fans their money back and the 1,500-capacity hall promptly emptied. There were scuffles on 43rd Street requiring police mediation. There was no second half after the interval. 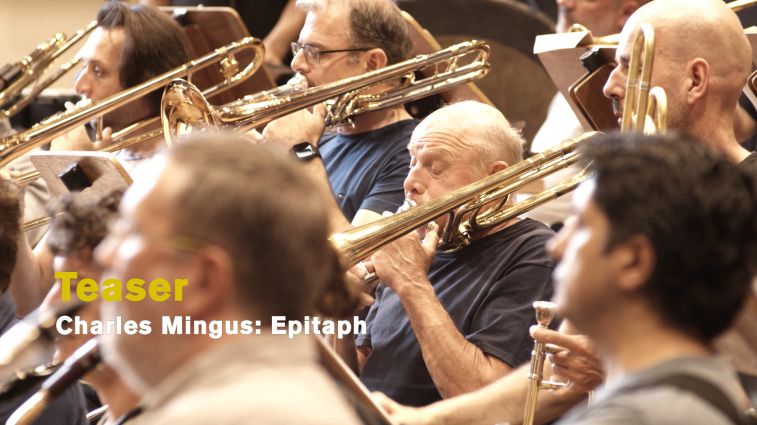 »The music is actually extremely varied, very dense and powerful, a unique work that straddles genres,« says Engel. Like Mingus, the conductor is at home in the worlds of classical music, new music and jazz in equal measure – and, like the maestro, Engel plays contrabass. Here he conducts »Epitaph« with the Big Band of the Deutsche Oper Berlin and young musicians of the Jazz-Institut Berlin (JIB).

And so it is that this rarely heard work is being revived for a present-day audience. After the 1962 debacle Mingus productivity declined steadily. A few years later he fell ill and lost the ability to play his instrument. Charles Mingus died in 1979 without ever hearing his signature work being performed. Years later, in the apartment of his widow, Sue, the 500 sheets of notation were discovered in an old suitcase.

For the concert in Berlin on Mingus’s 100th birthday the sheets have been transcribed based on the critical new edition. »The score has never been in a better condition,« says Engel. The work was no symphony, though. It contained a lot of improvisation and had to be allowed to breathe. »There’s still an adventurous element to it.«